What You Have to Do during Your Trip to Odessa

Ukraine is a rather diverse country where every city has its own personality, mood, type of tourists who go there and things you can do there to enjoy your trip. Kyiv is designed for those who are interested in exploring Ukrainian ancient history, taking part in religious traditions, trying the famous finger-licking Kyiv cake, and more. Lviv is all about spectacular architecture, quirky restaurants and unusual tours. Odessa has another vibe.

Odessa is one of the best summer getaways in Ukraine. Here you can escape the heat on the beach, stroll in peaceful green parks and alleys, and party hard at night in great open-air clubs with a motley crowd of international tourists. Another thing Odessa is famous for is its remarkable shady past connected with infamous gangsters, Ukrainian mafia, counterfeit money production, and special tunnels dug under Odessa to secretly transport smuggled goods.

And even this is not it! There are plenty of secret streets, fantastic museums and hidden gems off the tourist pathways. We are bringing to you top great things to do in Odessa when you travel there. Based on my personal experience ;)

1. Count the stairs at Potemkin Steps

The Potemkin Stairs is one of the main tourist attractions in Odessa designed by an Italian architect Francesco Boffo in 1825 as an entrance to the harbour below. The staircase was constructed in such a way that it created an optical illusion so that those people standing at the top could see only those steps which are close to them, while others below merged into one large line. Looking up the stairs makes them seem longer, while looking down makes them seem quite short.

On the left side of the Potemkin stairs there is a funicular. However, it’s better if you walk the staircase up and count the steps. Initially there were 200 steps, but after all the reconstruction their number changed. Which to? Tell us after you count them in the comments below ;)

2. Send your wish to the statue of Duc de Richelieu

This statue is dedicated to Duc de Richelieu, the first mayor of Odessa. Originally a Frenchman, Duc arrived in Odessa just eight years after it was founded. Back then Odessa was a small settlement with a few wooden houses. Being a mayor, Duc de Richelieu made many changes to the city allowing it to turn into one of the most prominent cities at the time. Odessa became a large commercial port. Odessa Opera House, the printing press, Commercial College, Institute for Noble Maidens and other important governmental buildings were constructed here.

Duc is holding a manuscript in his right hand with a map of Odessa he helped to shape and grow. If you would like to make a fortune, touch the money bag on the sculpture. Just walk up from Potemkin Steps towards Primorsky Boulevard to make a wish.

For those in favour of tasting truly good alcohol, visiting Shustov museum would be a cherry on a pie. At the beginning of the 20th century the Russian Empire had no brand-name products as popular as cognac “From Shustov”. It became the first non-French factory to produce and export cognac thanks to Shustov’s hard work, marketing skills and creativity. The biggest Shustov’s victory was the Grand Prix received at the World Exhibition in Paris in 1900 which officially turned ordinary brandy into high class cognac.

In Shustov museum tourists can learn about the history of cognac and Shustov factory, taste different types of this noble drink, enjoy an excursion to ageing rooms where the spirit goes through distillation, and learn the ‘correct’ way of drinking cognac. There is also a large shop where travelers can buy the famous cognac and souvenirs from Shustov museum.

Another great thing to do in Odessa would be to visit the zoo. In fact, Odessa Zoo has the status of nature reserve with the collection of 1600 animals some of which are enlisted in the International Red Book. The zoo is located in downtown, on 25 Novoshepnoy Ryad Street.

Just take some carrots, bread, apples or grapes with you and feed some animals. Oh, and in some parts of the zoo small animals and birds walk freely. So be friendly with them. For your own good :) 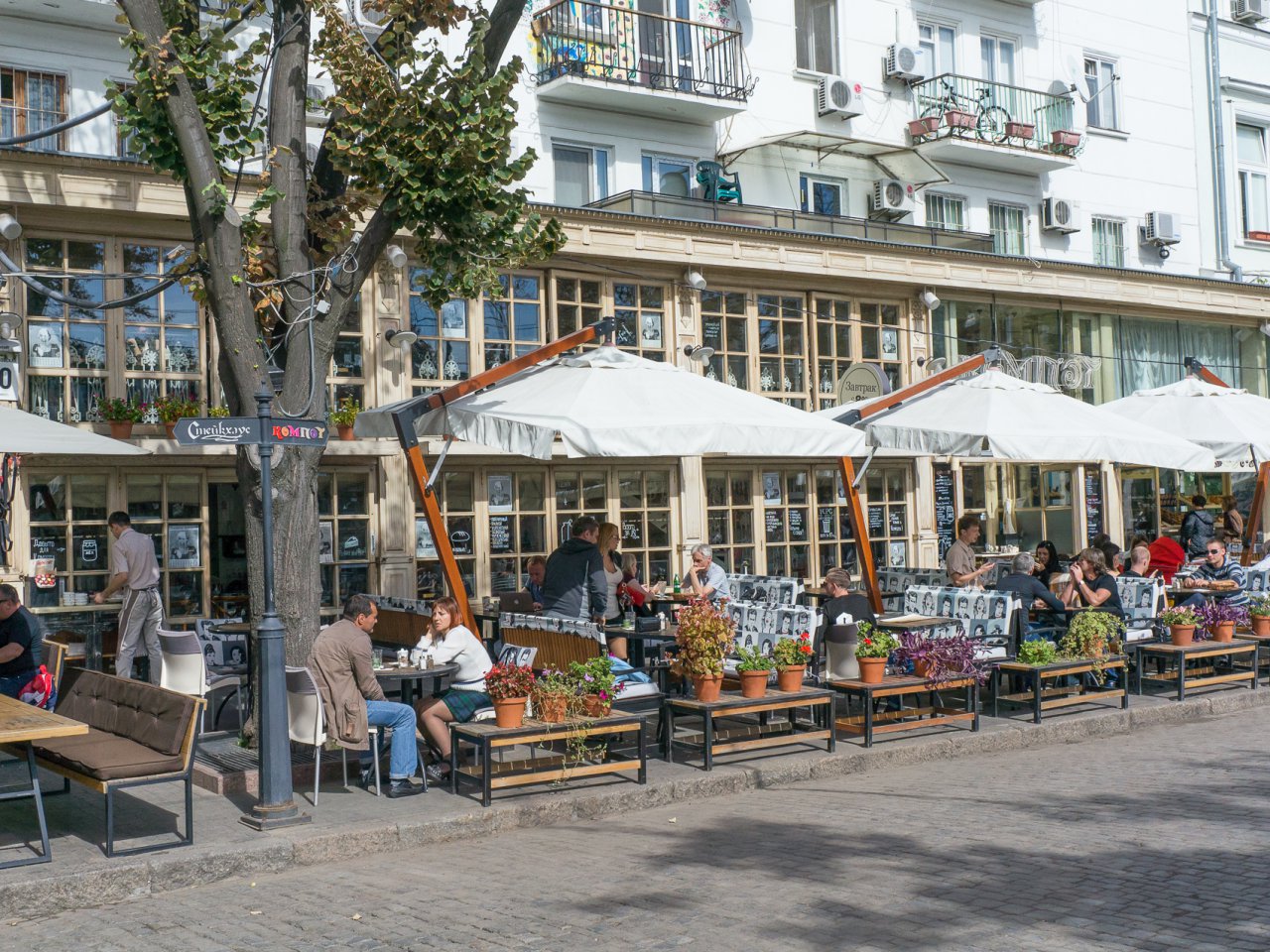 Paved with stones Deribasovskaya street is the most vibrant and popular street in Odessa lined with ancient buildings, numerous restaurants, cafes, bars and shops. Deribasovskaya street appeared almost at the same time with the city itself and was named after one of its founders – admiral Joseph de Ribas. 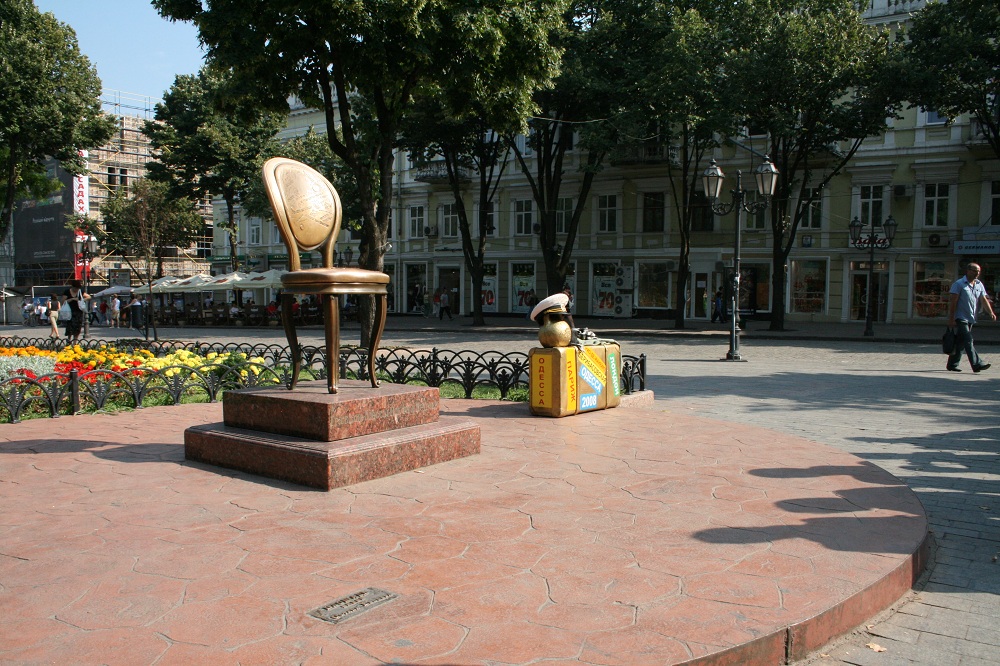 Odessa City Garden is adjacent to the street. It is a very big park, with centuries-old trees, and the famous monument to the Twelfth Chair. This monument is particularly popular among locals and those who read ‘The Twelve Chairs,’ a well-known humorous book by renowned Odesans Ilf and Petrov. As a rule, there is a long line in front of it. Everyone wants to take a photo with the famous fictional chair.

6. Check out all yards and corners you can find

So at the beginning of Odessa there were founders, Deribasovskaya street and … yards. Each court yard is unusual and yet similar to others. There are ropes with wet clothes hanging on them, just like in the old days. Odessa has managed to preserve this authentic element of its city architecture.

According to the knowledgeable guides born in Odessa, almost every court yard in the city had a secret tunnel under it with all catacombs connected with one another. They were used by criminals and locals to transport smuggled goods from the tax-free Odessa to the neighbouring cities where they were sold at much higher prices. This is how locals were making money on the commercially favourable location. In any case, these court yards are just nice to check out.

7. Take photos from the Mother-in-law Bridge (Teschin most)

The fascinating pedestrian Mother-in-law bridge joins Primorskiy Boulevard and Jvanetskovo Boulevard and is increasingly popular among locals and tourists alike. It is the longest, narrowest and tallest bridge in Odessa. Despite the fact that the bridge has had a couple of official names, everyone has known it under the name ‘Mother-in-law bridge’.

The legend has it that Mr. Sinitsa, the Soviet official who order the construction of the bridge in Odessa, really loved the pancakes his mother-in-law cooked. She lived on the other side of the ravine, though, so it was a real pain for Mr. Sinitsa to walk to her every lunch break. It is very unlikely that the legend is true, however, it is still a very nice story, so why not believe in it! 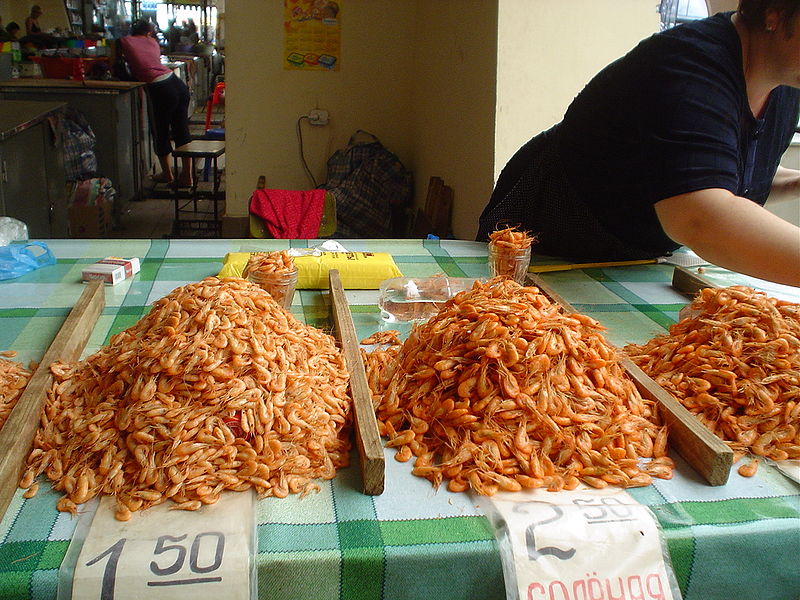 The jewel of Odessa – Privoz market. It is a legendary bazaar in Odessa where they say you can find absolutely anything you want. The market started working in 1827 and has become much larger since then. Now you can find there anything from caviar, clothes, shoes and accessories, to toiletries, perfume and all types of food. Go there and experience the atmosphere you wouldn’t be able to be part of elsewhere!

As for some piece of advice, the first and foremost, bargain! Whatever the price that you hear is, even if you think it is cheap and acceptable, bargain. It is an essential part of etiquette at Privoz market. You’ll definitely be able to buy it at a cheaper price. 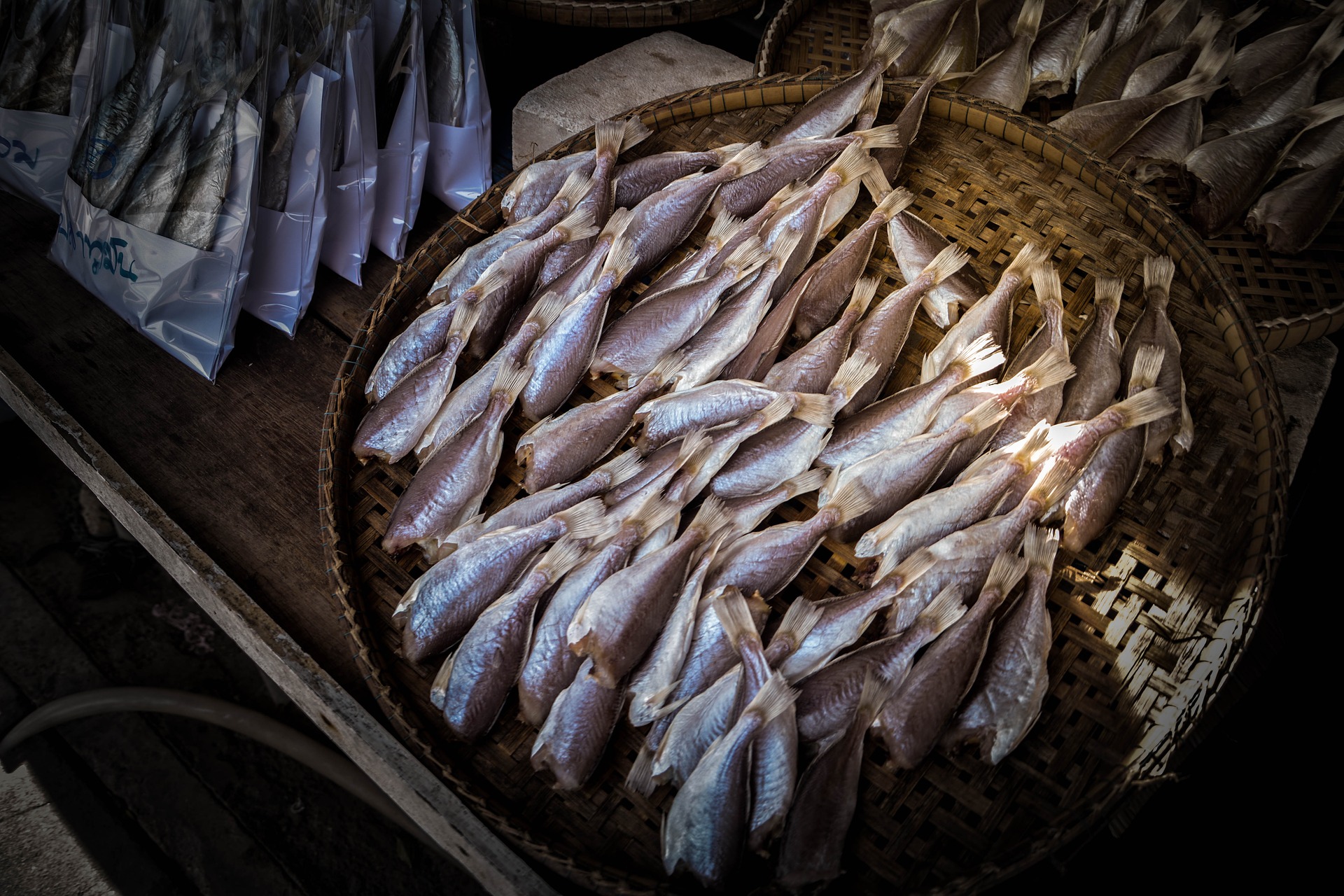 What you must buy at Privoz market?

Well, first of all, fresh squeezed pomegranate juice and traditional pomegranate wine. The wine doesn’t have much alcohol in it but it is very sweet and has a saturated, exquisite taste of pomegranates. Secondly, get some spices. Just come to the specialised vendor and tell him/her what you need them for. The vendor will not ask any questions and just create a perfect mixture for your perfect dish! And, of course, buy lots of fish. There is a wide variety of fish sold there. Just fry it and enjoy. 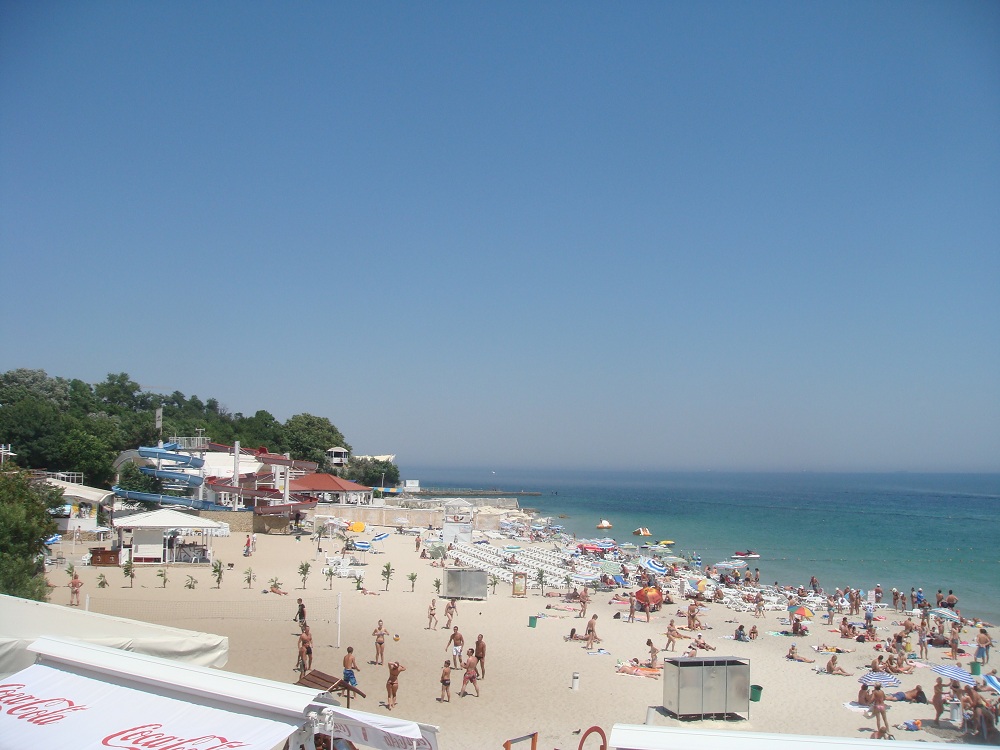 Arcadia beach is the most famous beach in Odessa. Arcadia is a very popular beach, health resort, and summer nightspot in Odessa with lots of clubs right close to the sea which are open from May till September.

Arcadia is just 15 minutes taxi drive from the city centre, though, you could opt for a walk there which should take up to an hour. It’s a nice way of exploring Odessa.

Finally, FOOD. Despite the popular traditional Ukrainian dishes, Odessa has its own unique cuisine which is absolutely finger-licking. The best places to try it is “Gogol-Mogol’, ‘Kompot’ and ‘Pechki Lavochki‘ restaurants. At ‘Kompot’ you can try the traditional babushka-style made kompot (drink from berries), Ukranian traditional dishes and delicious pastry. As for Pechki Lavochki, they are designed in the typical ‘Odessa gangsters’ style with the menu crammed with jargon words and funny names of the dishes. It’s a relatively cheap restaurant to try local Odessa food.

What dishes you must try in Odessa?

We hope that these tips will help you truly enjoy your trip to Odessa-mother. Of course, there is much more to do in this great sunny city in Ukraine and the list of the must-do things can be enormous.