For the first time in my life, I went to a place from which I did not expect anything special. Paris, and so what? Yes, the Eiffel Tower, the Champs-Élysées and other beautiful places are situated there – but in each city there are places worth of attention.

In a word, I got on a plane and just flew to a new city for me. It is hilarious that on an airplane, which was delayed for an hour and a half, an old lady asked me whether I would get off at the next stop or fly to the final one. We decided to fly to the end.

Guess who was the only person that was questioned at the airport most of all? Yes, it was me. I told everything about my life, even the things I did not know. I showed how much money I had on the account, promised that I would not marry the first comer Frenchman and would not start a brawl somewhere. 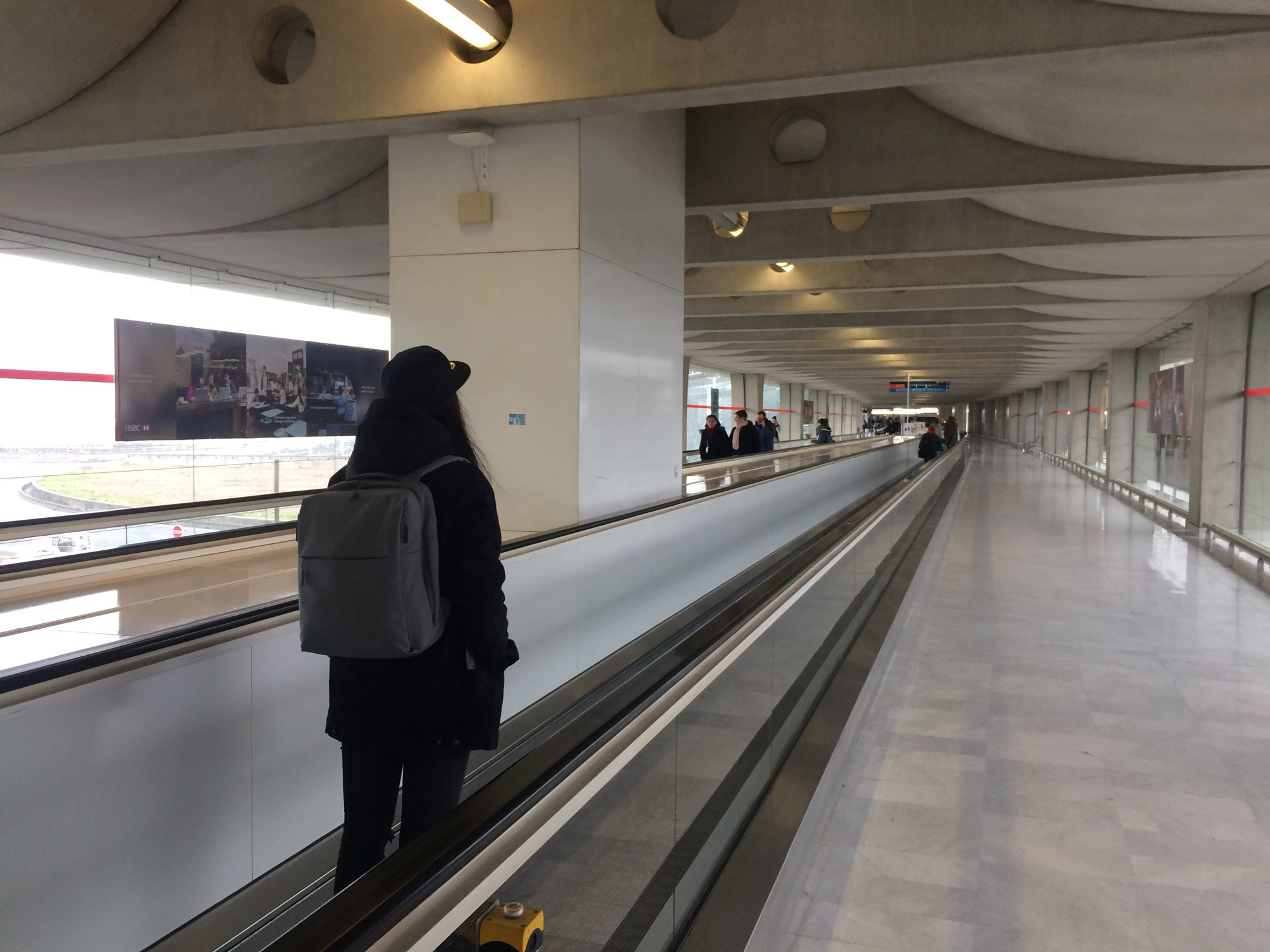 So, I arrived at the Charles-de-Gaulle airport. There are three main ways to get to Paris from the airport:
1. suburban trains RER (€10,30) + metro;
2. car rented at the airport;
3. taxi.

I want to note that Parisian suburban trains are not the same as in my home country. Above all, they are fast and convenient and sometimes even comfortable. Trains look worse than aeroexpress but an extensive network and convenient connections to the underground allow you to get anywhere in Paris and suburbs easily.

You can buy tickets in special vending machines. There you can choose between the French, English and Spanish languages. As these machines usually accept only French credit cards, the method of payment is a trifle (cash).

In case you do not have trifle or something just does not work, you can turn to the ticket office or change money at a nearby cash dispenser.

Between the three existing ways to get to Paris, I chose the first one – because I don’t know how to drive a car, and taking a taxi is for weaklings – and one hour later I was in Paris. 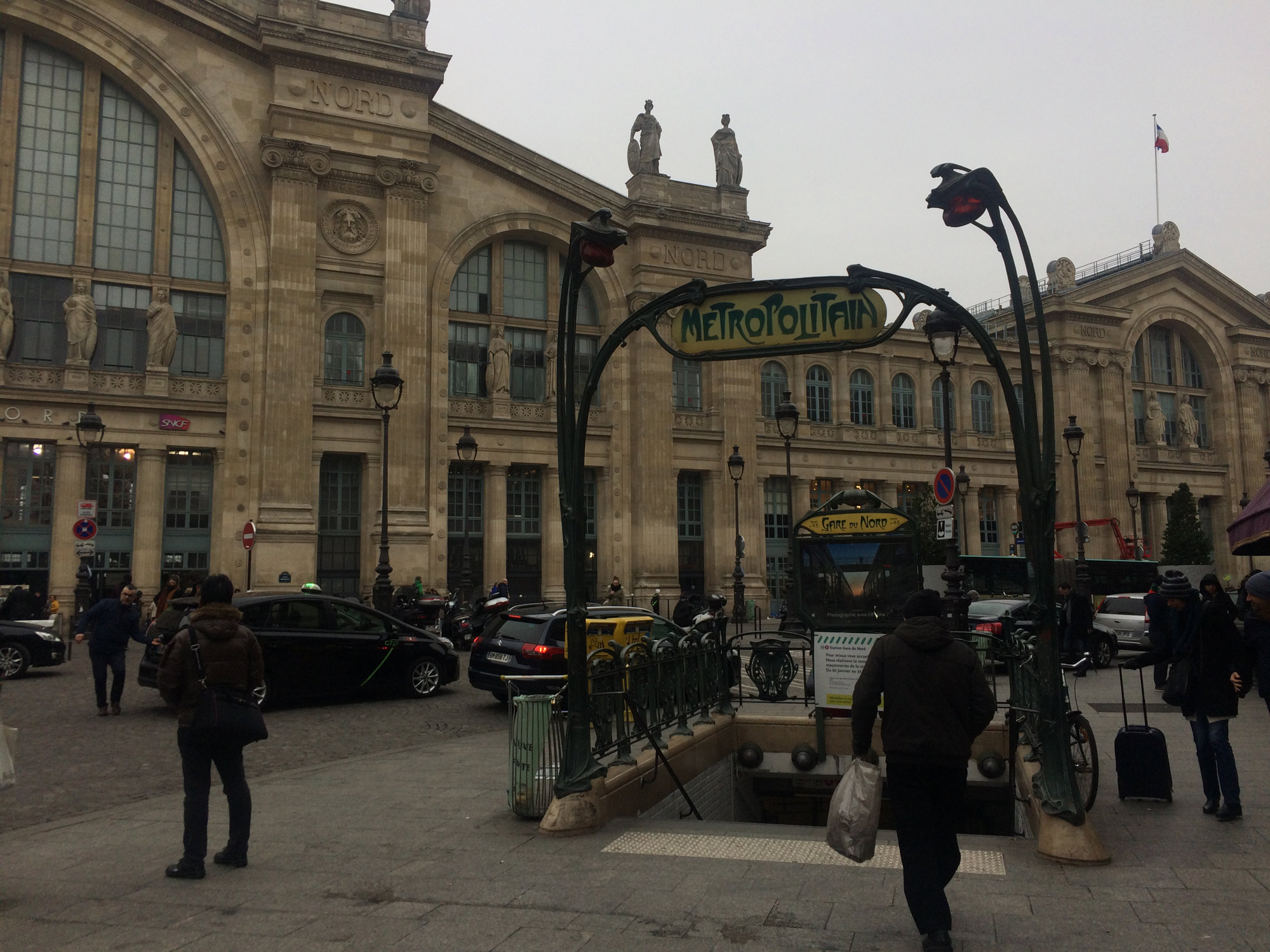 I am in Paris.

After reading tons of useful advice from locals and recommendations from tourists, I decided to visit Montmartre and Sacre-Coeur first of all.

Montmartre is the highest point of Paris. From here you can see the whole city, even the Eiffel Tower. It is particularly beautiful at night when the backlight is turned on.

The old man who played the accordion said that Montmartre is considered one of the most expensive areas in Paris, as many well-known people lived here and the canvases of Van Gogh, Picasso and Renoir still convey the beauty of the narrow streets and Sacre-Coeur. Lots of music, lots of tourists, lots of photographers… For 20 euros you can even get your portrait painted by one of numerous street artists. In a word, this place fascinated me and, if I had stayed in Paris for more than two days, I would have certainly come here again. 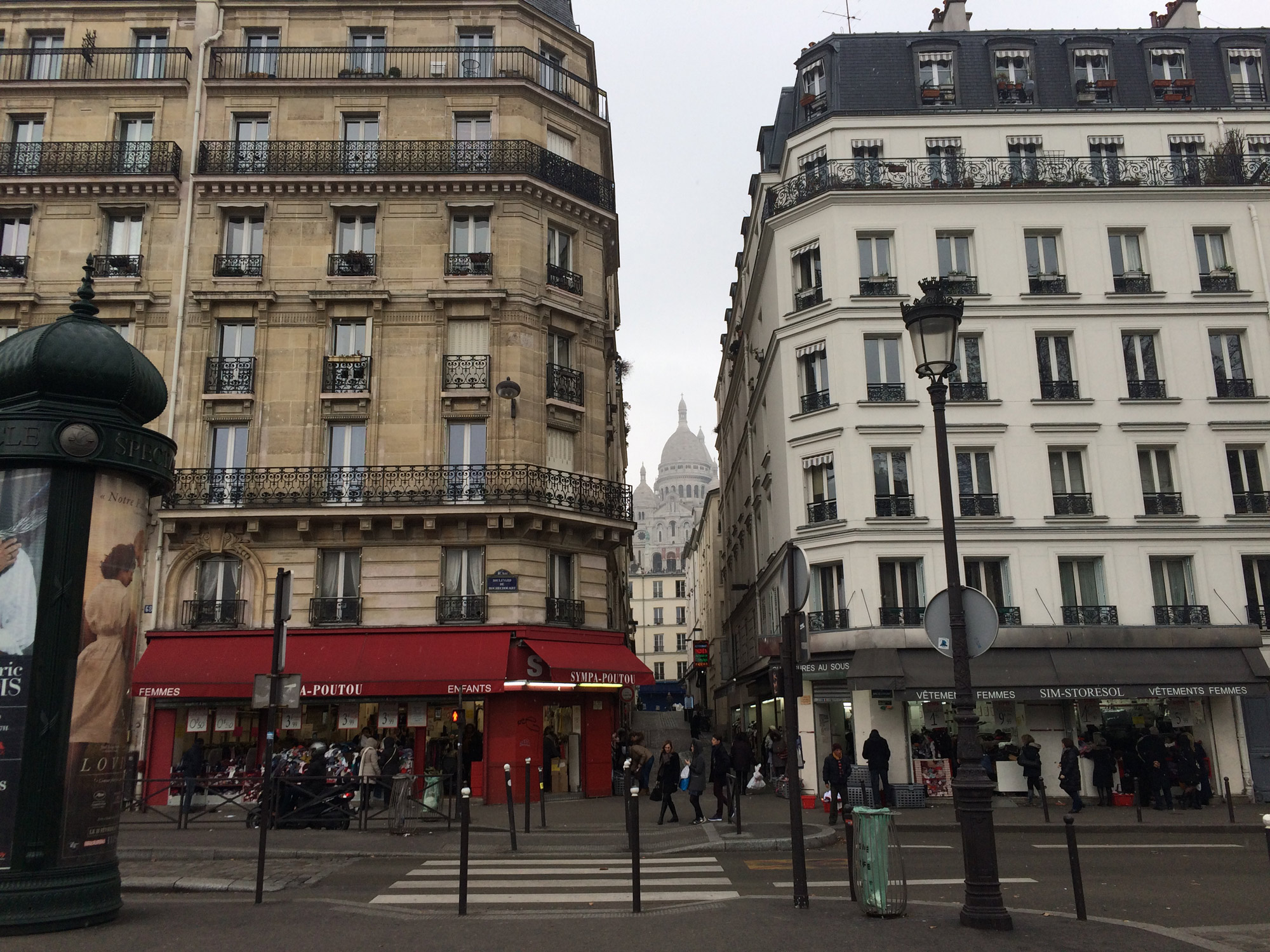 What do tourists seek in an unfamiliar city? That’s right, bread and circuses! I have already seen some circuses and now it is time to eat well. I wanted to find an unusual, soulful, quiet place. And I found it. 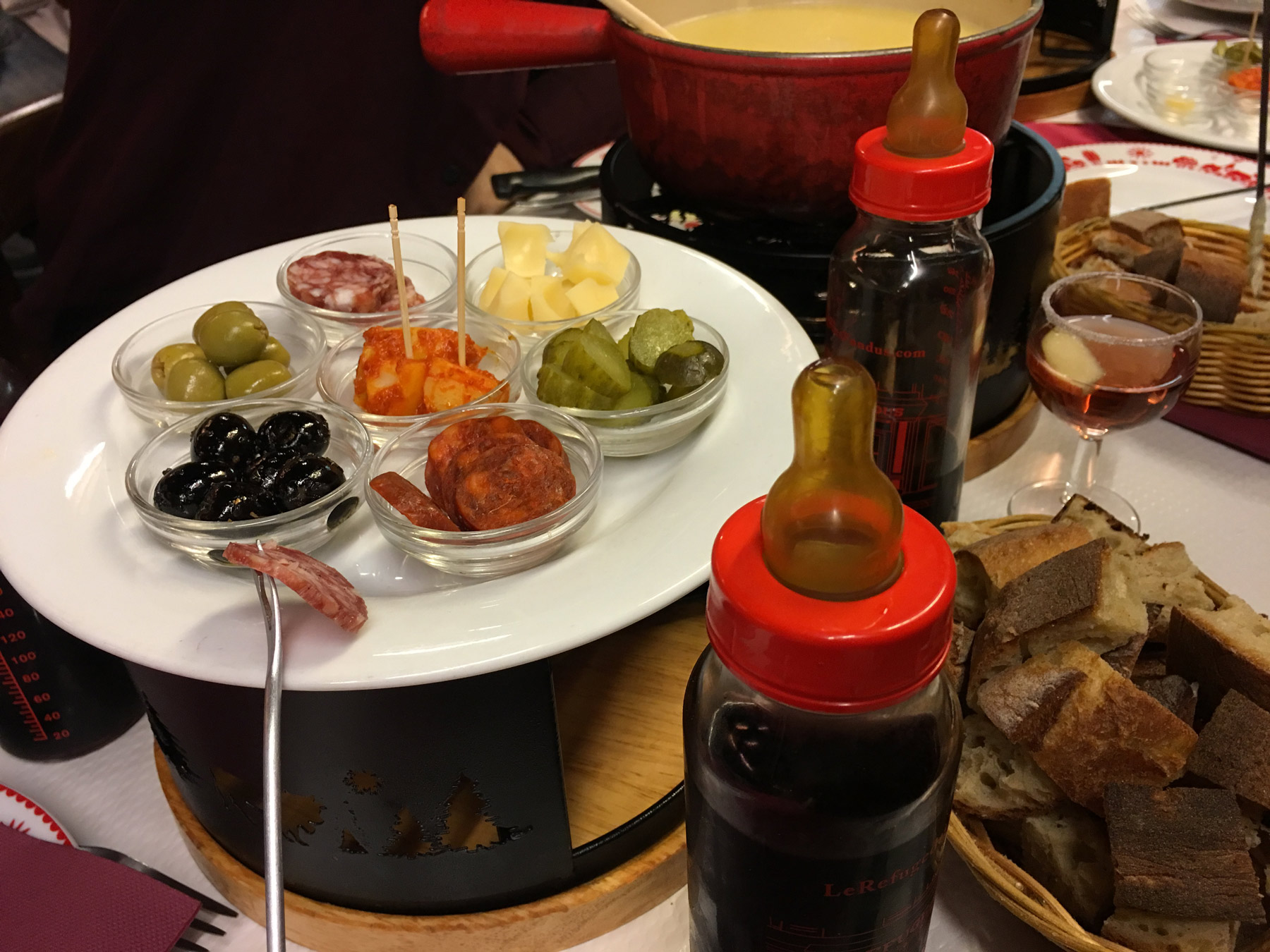 This place struck me. The building of the cafe resembled a cellar, there was very little space. The total capacity was 30 people tops and it is only if they sit elbow to the elbow. All the walls and even the ceiling were plastered with banknotes of different countries and covered with words like “I was here”. 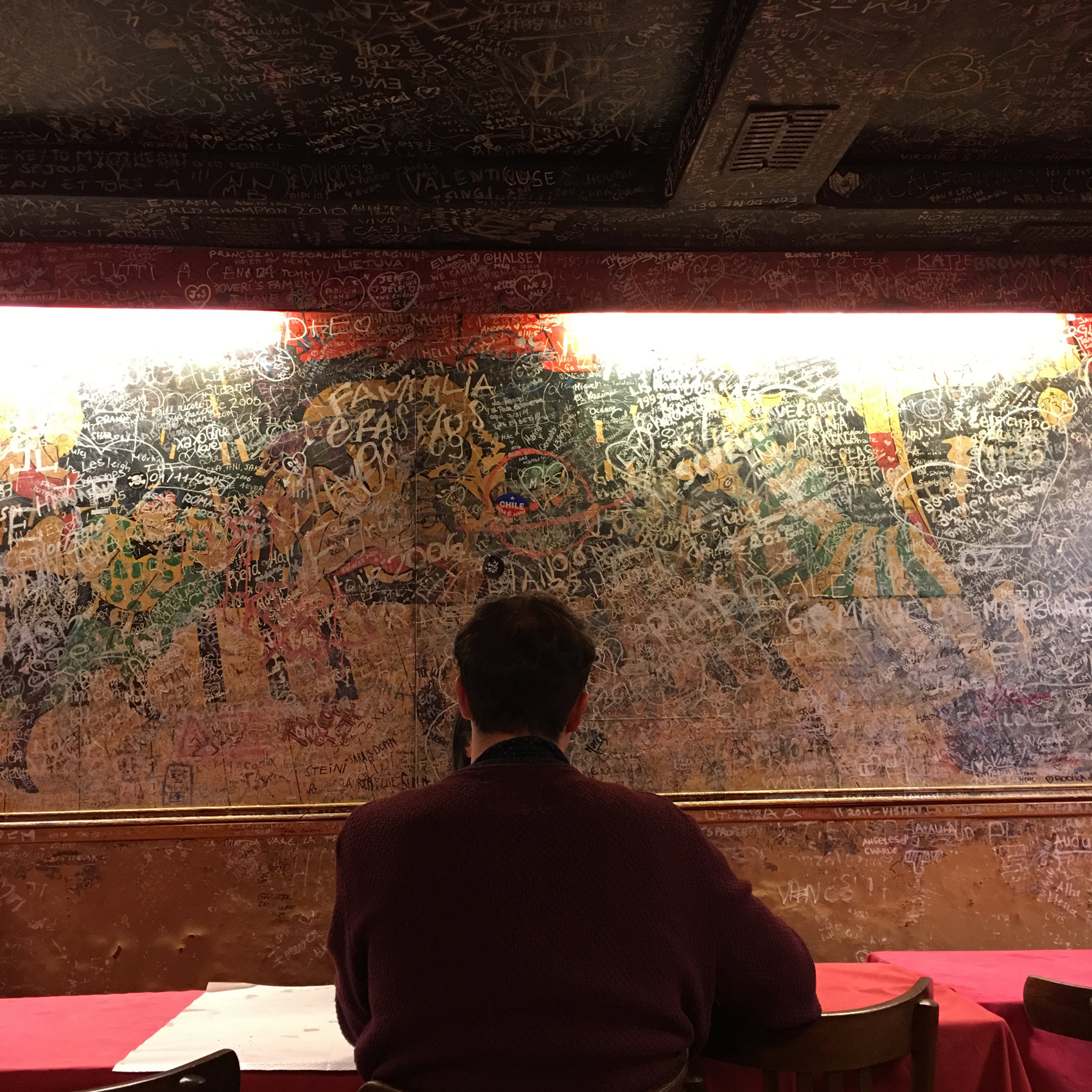 “I was here” wall

To get to the table, you have to climb over it. Every time the girl did it, everybody clapped. It seems to be easy but in fact, something always fell down and poured out – but it was fun and the atmosphere was as if in a family. They serve only fondue and snacks to it. Snacks and aperitif are brought right away, wine is served in the pacifiers, and children get the juice. This place is highly recommended to every amateur of unusual restaurants!

On the minus side, you can pay only in cash. If you do not pay attention to a small sign on the entrance door, you would never guess they do not accept credit cards. So you have to run to the cash dispenser located not far away, but the residue remains. Three people had to go to cash dispenser only while I was there.

Well, now, after reading the article, you are prepared and you will enjoy the evening without any surprises.

And what do you need after a good meal? – Good sleep! But not in Paris, so we went to see the second most visited Parisian attraction – the Eiffel Tower. About the location number one I’ll tell you later. 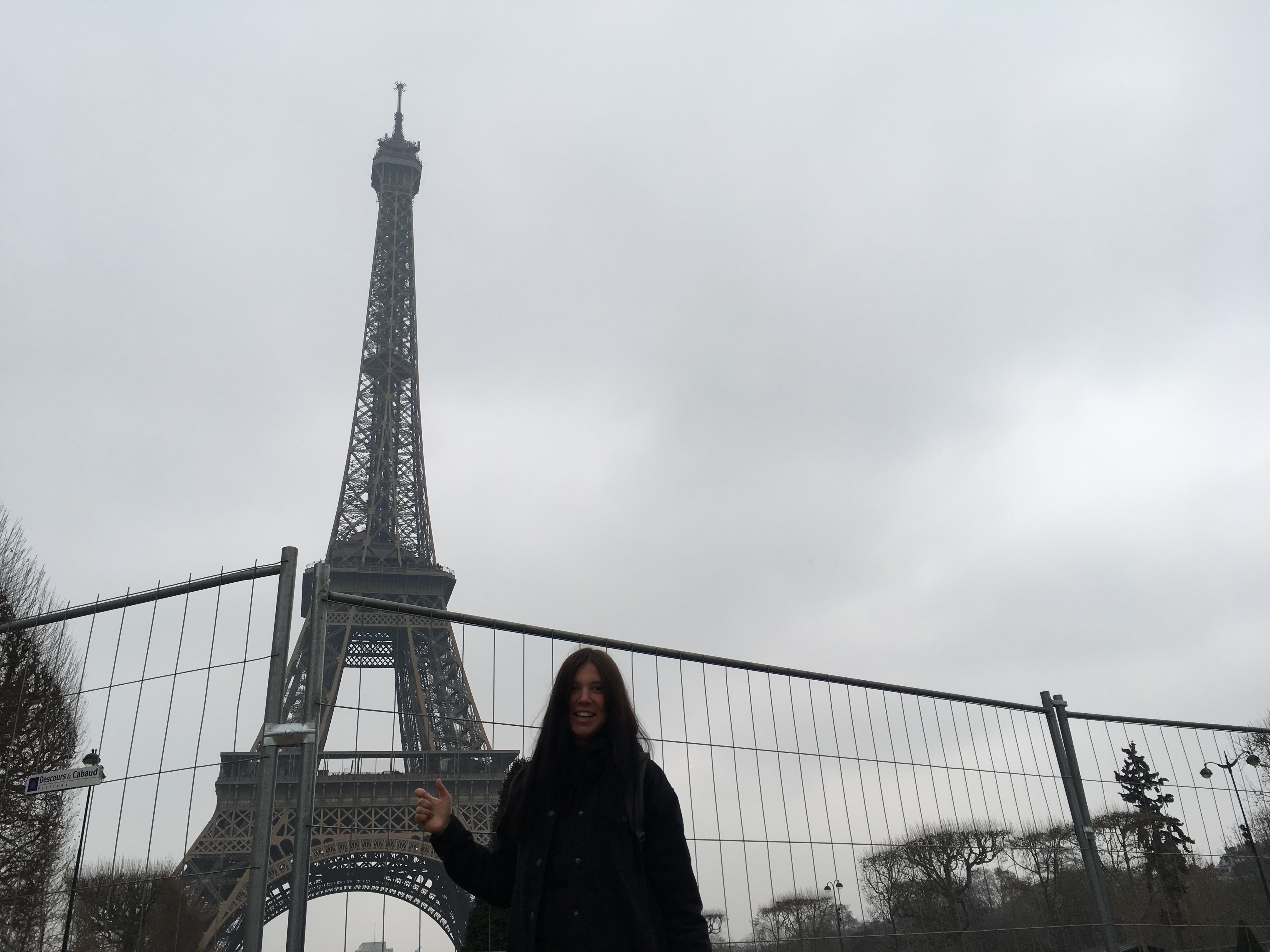 But why believe someone if you can check it yourself? During one year, the Eiffel Tower is visited by up to 7 million tourists, sometimes even up to 30,000 people a day. 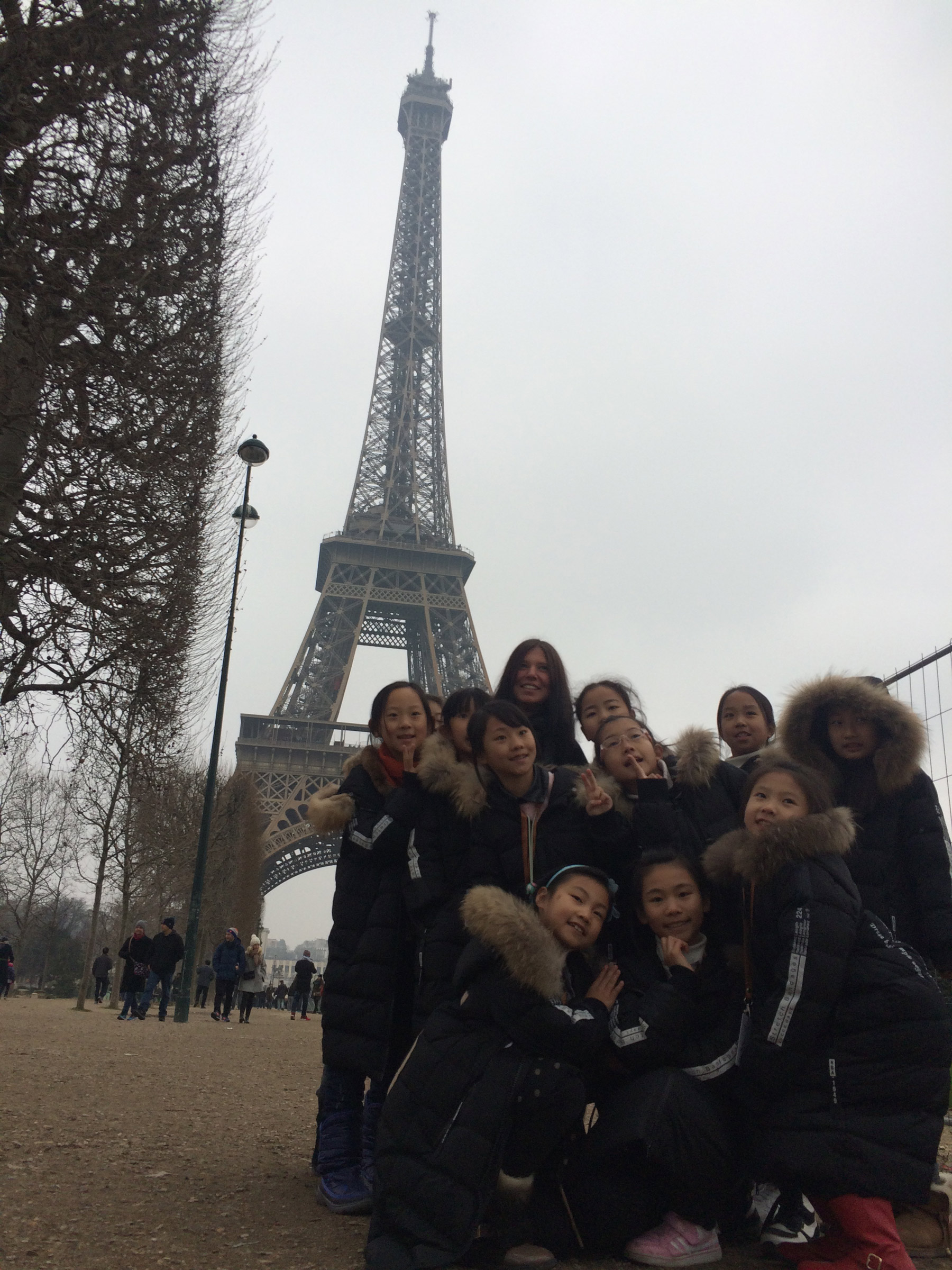 This was too cute!

They say that once Hitler could not mount the tower because the elevator did not work. We were more fortunate. Just some 50 minutes in the cold and you are upstairs. All that I can say –– yes, it is beautiful, you can visit it once. However, I still cannot understand whether it was worth the time and frostbitten hands, but as a fact – we climbed the tower.

The next destination is Notre-Dame de Paris.
Address: 6 Parvis Notre-Dame – Pl. Jean-Paul II, 75004 Paris, France
Open hours: the Cathedral is open every day of the year from 7:45 am to 6:45 pm (7:15 pm on Saturday and Sunday).
Price: the admission is free, but you have to stand in line and wait for your turn to enter. 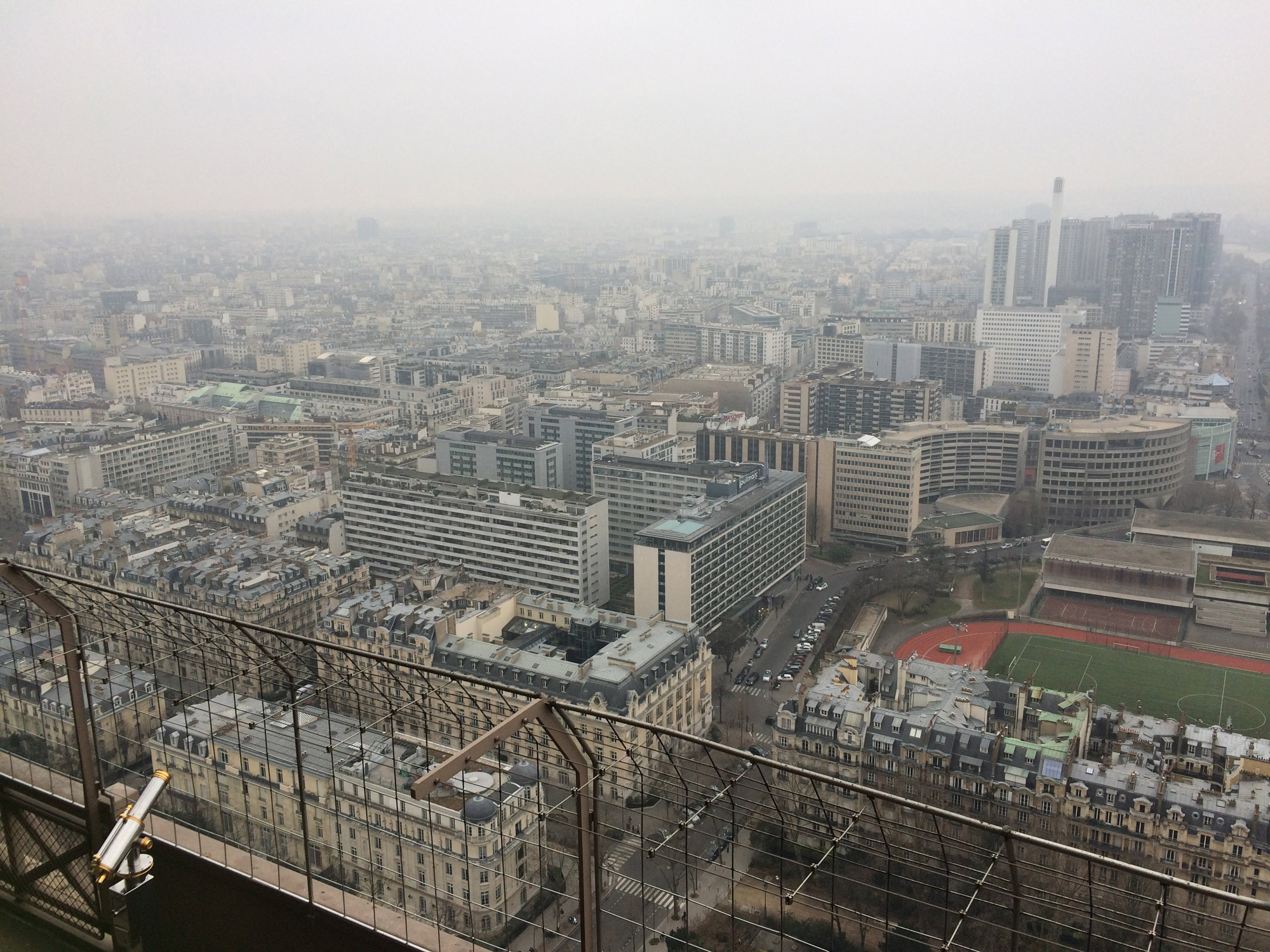 People, pigeons, people, and pigeons again. Notre Dame de Paris ranks first in attendance in Paris. Admission is free, however, no luggage is allowed. More than two-thirds of Notre-Dame is accessible to people with reduced mobility. Next to the monument, you will find all the information to access the Cathedral via various means of transport.

It is interesting thatthere are no walls in the Cathedral. All space is occupied with pillars connected by arches. In the openings of the arches – stained glass, which is incredibly beautiful.

Go inside, leave your cameras and phones for a while. Just enjoy the beauty and power. I could not leave the phone, so here’s a photo for you. 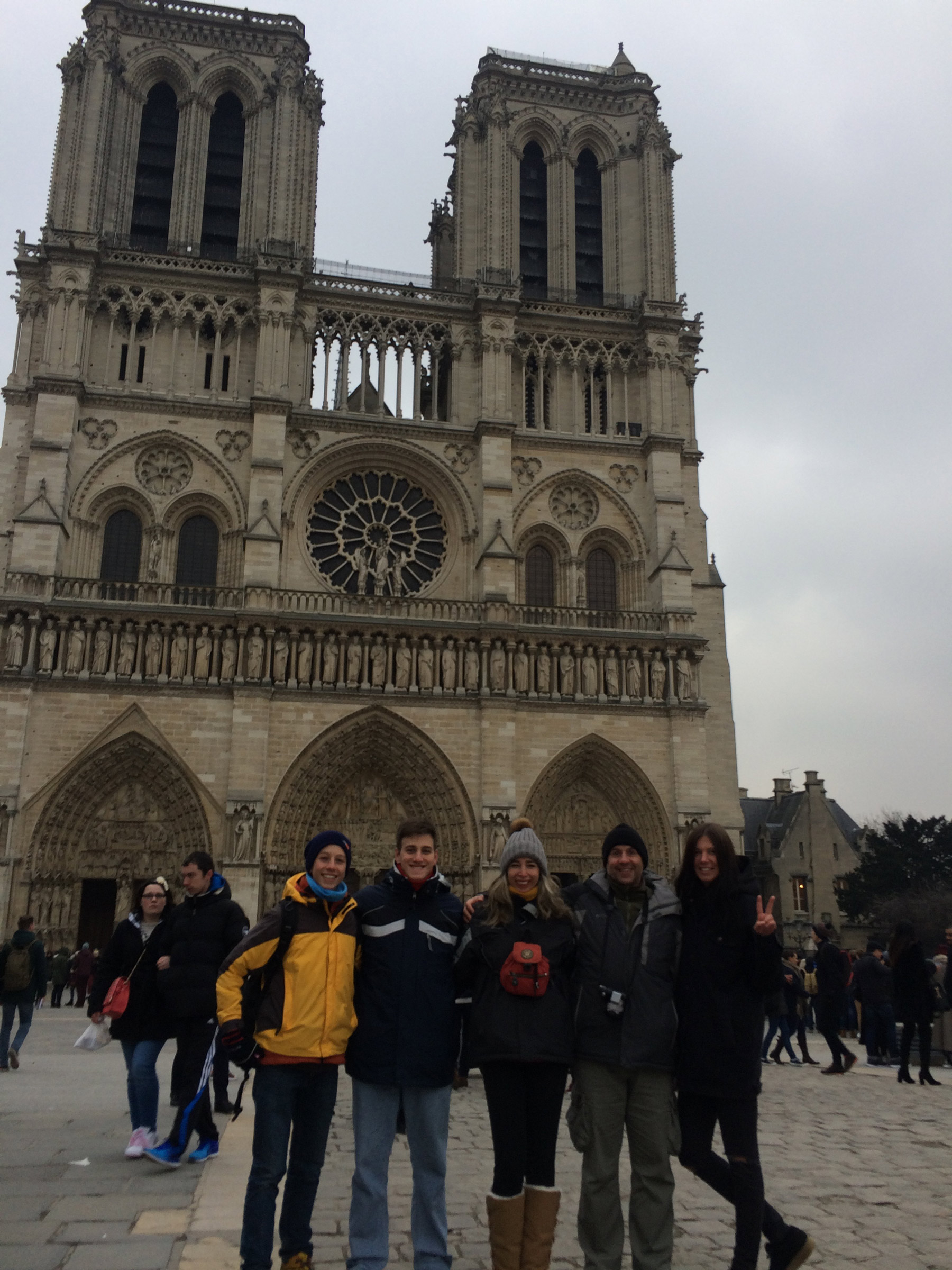 Next to the Notre Dame de Paris

The next place we went was the Pompidou Center for Contemporary Art.
Address: Place Georges Pompidou, Paris 4e
Opening hours: from 11:00 to 21:00 daily, closed on Tuesdays and 1 May.
Price: full rate – 14 EUR, preferential – 11 EUR, every first Sunday of the month – free of charge. 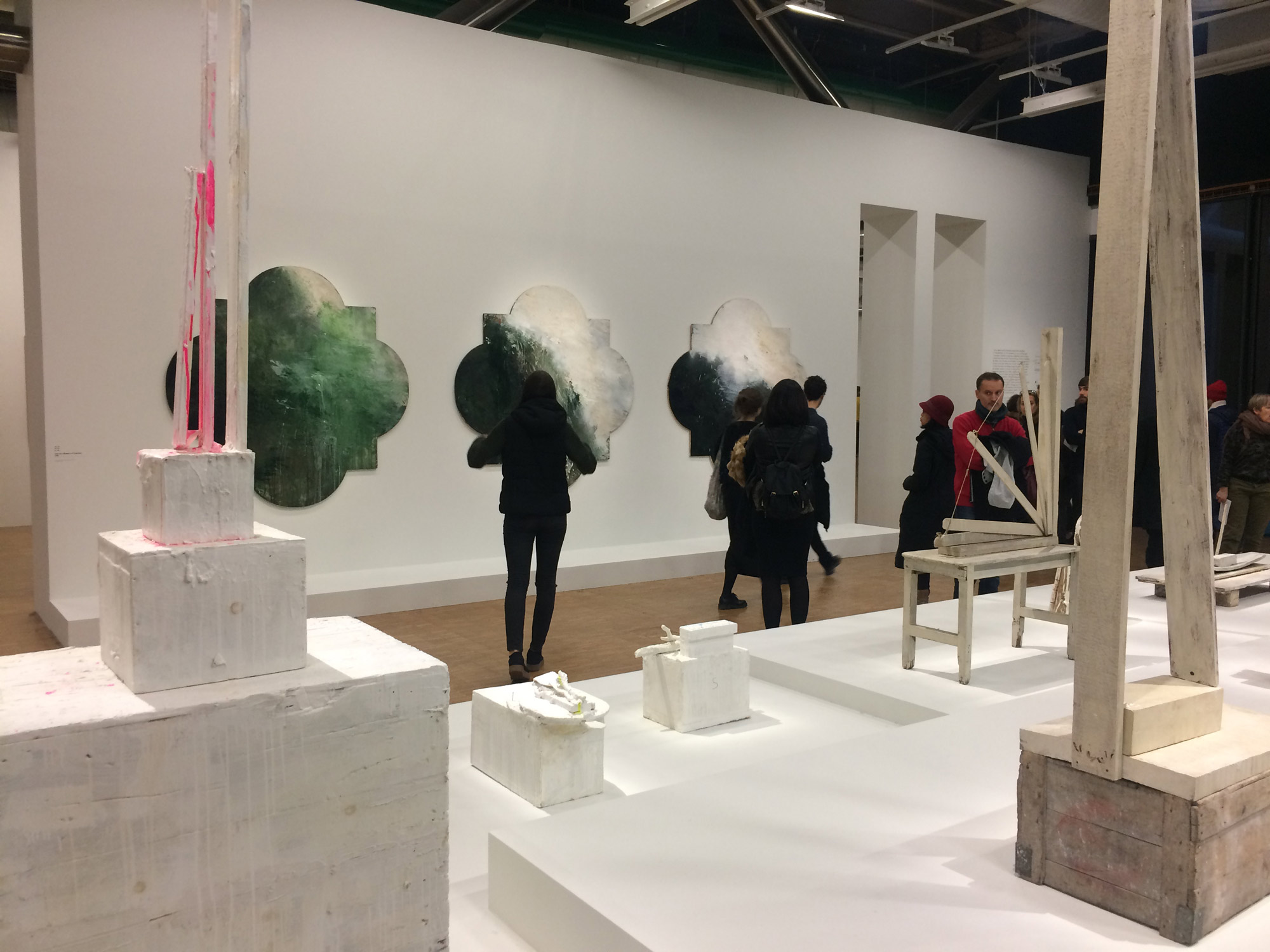 the Pompidou Center for Contemporary Art

The Pompidou Center attracts tourists from all over the world not only because of the unusual exterior but also because of the inner content. At once, it gives you an impression that you can’t see it all in one day – the museum has five floors. On the ground floor, there is a cinema which hosts film festivals and displays art-house movies.

The second and third floors are designated for a rich public library containing millions of books and videos. Don’t be afraid – you will certainly be able to find something in your language. You cannot take books with you, they are all available only in the center.

The third and fourth floors are occupied with the Museum of Modern Art, its collection includes about 60,000 works of art created by more than five thousand authors. Just imagine it. 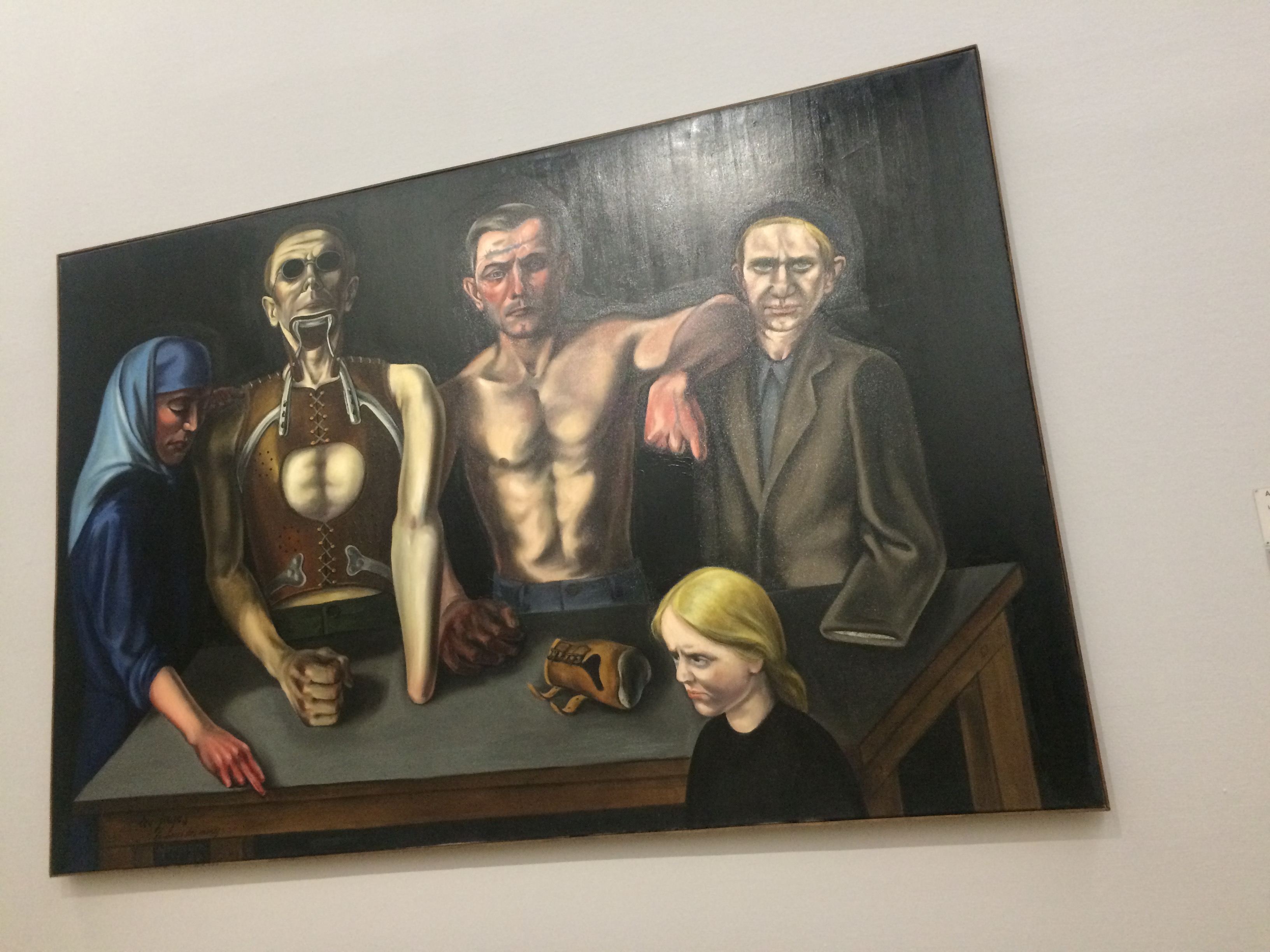 What is interesting – the frightening view of the Center and the huge dimensions for Paris were taken as a mockery. Despite this, the building project won in the competition which involved more than 500 architectural projects.

The visitors here are completely different. Couples and single people, the young and the old, hipsters and businessmen visit this place. If you do not have anyone to go to the Center with – do not worry, there is always someone who wants to flirt with you. 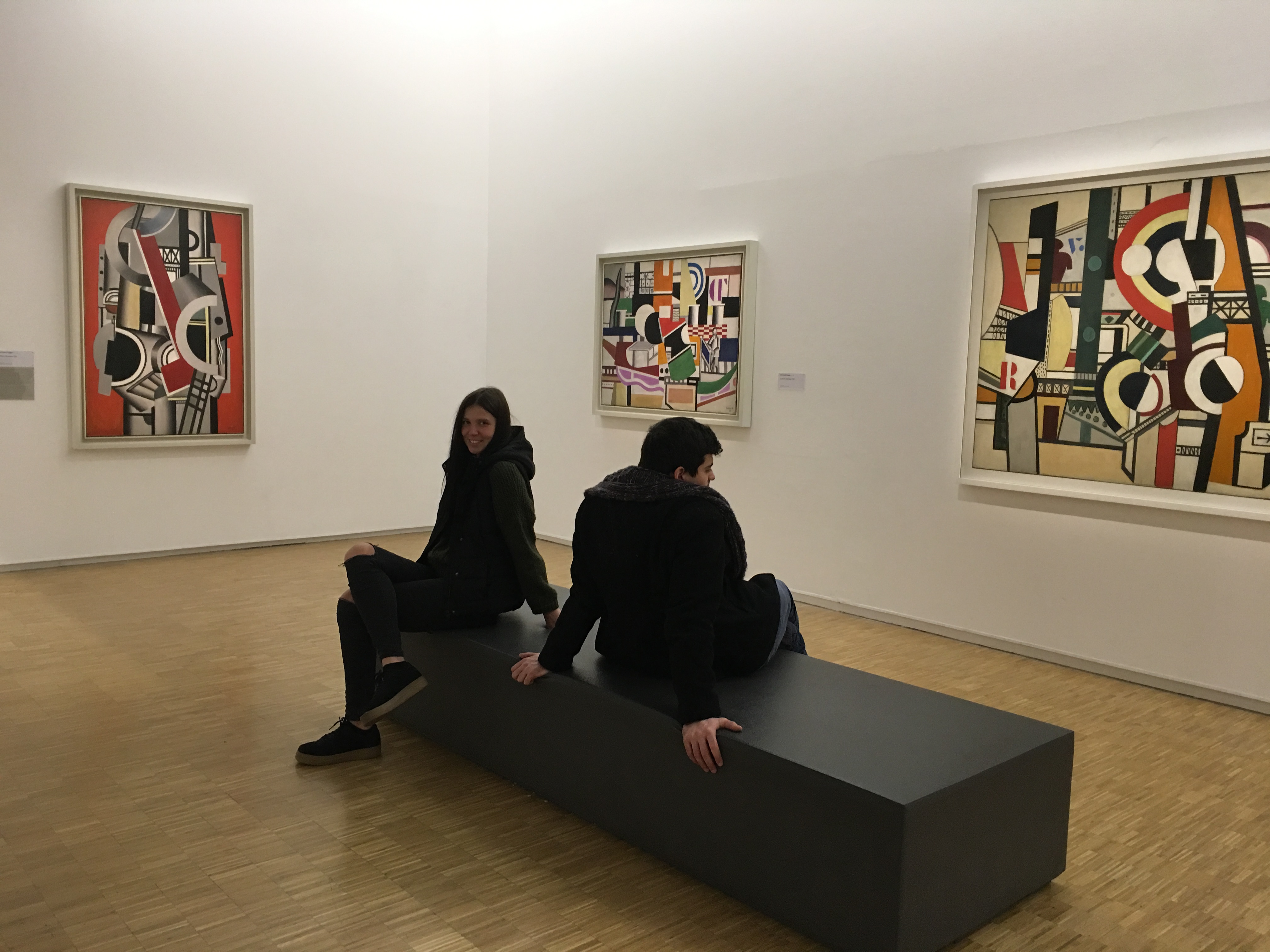 Near the Center, life rages 24 hours a day. Mimes and clowns, musicians and circus perform on a large square. The most convenient way to watch it is to sit right on the pavement in front of the Center.

Well, 2 days passed by. It remains only to eat well and to get to the airport. We chose a cozy, nice place in front of the station.

Just kidding, we did not choose anything – it was open, so we went there. At 8 am there was no particular choice. And we were lucky. 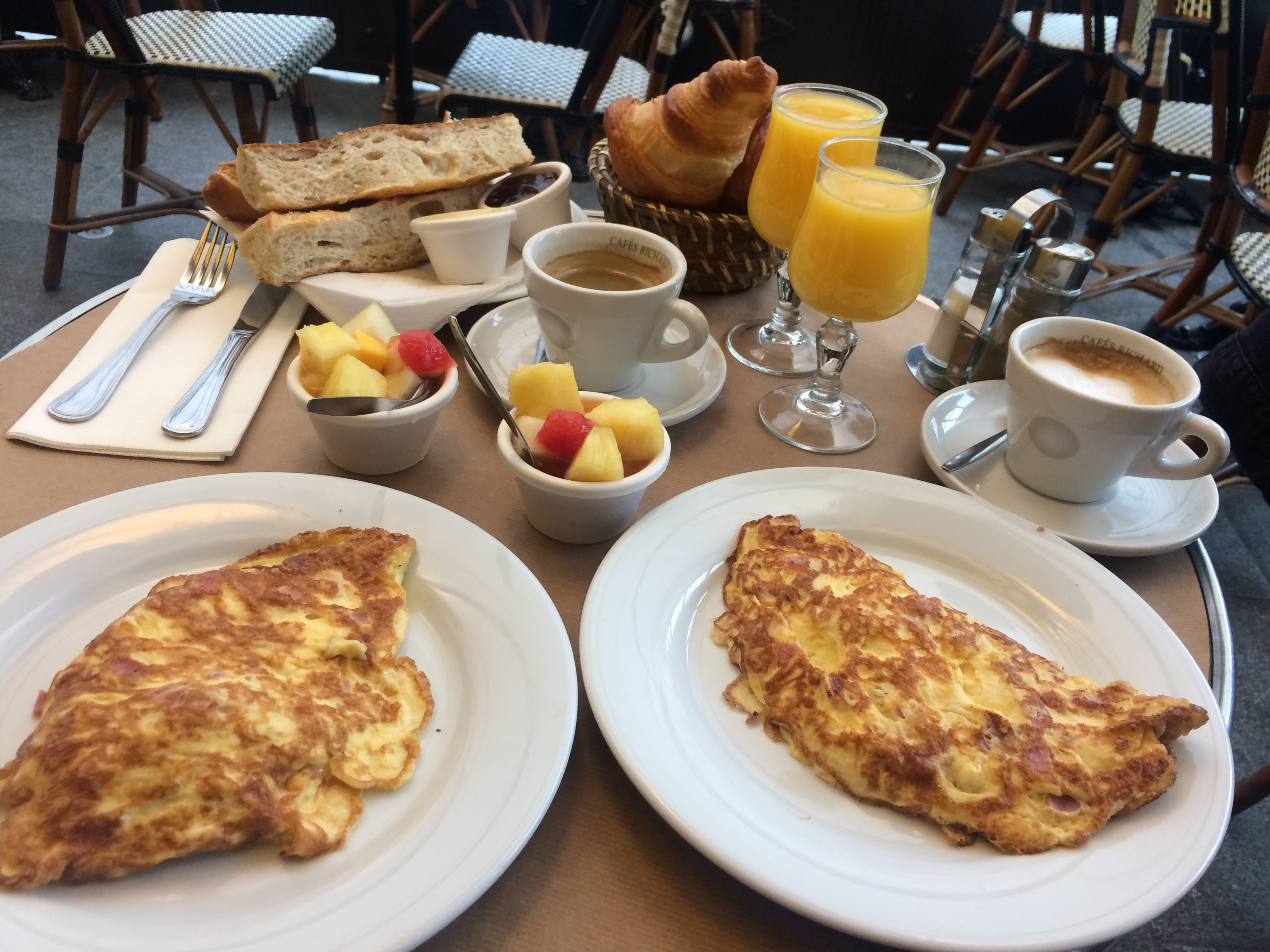 Located across the street from Gare du Nord and near any number of hotels, it has a convenient location for those arriving and departing.

Overall impression – a decent, nice place. We were served quickly, and the staff was polite. Conveniently, the menu was in several languages, including Russian and English. Heaters worked on the street, so it was warm even on a cool morning. Nobody smoked.

And this was the end of a small French weekend. I will return to Paris – definitely. Therefore, if you have not decided yet where to spend your next weekend – this article will help you!

My Favourite Places in Lyon, France
Charming Paris – Best Things to Do in the Ca...
Why Choose Fuerteventura from the 7 Canary Islands