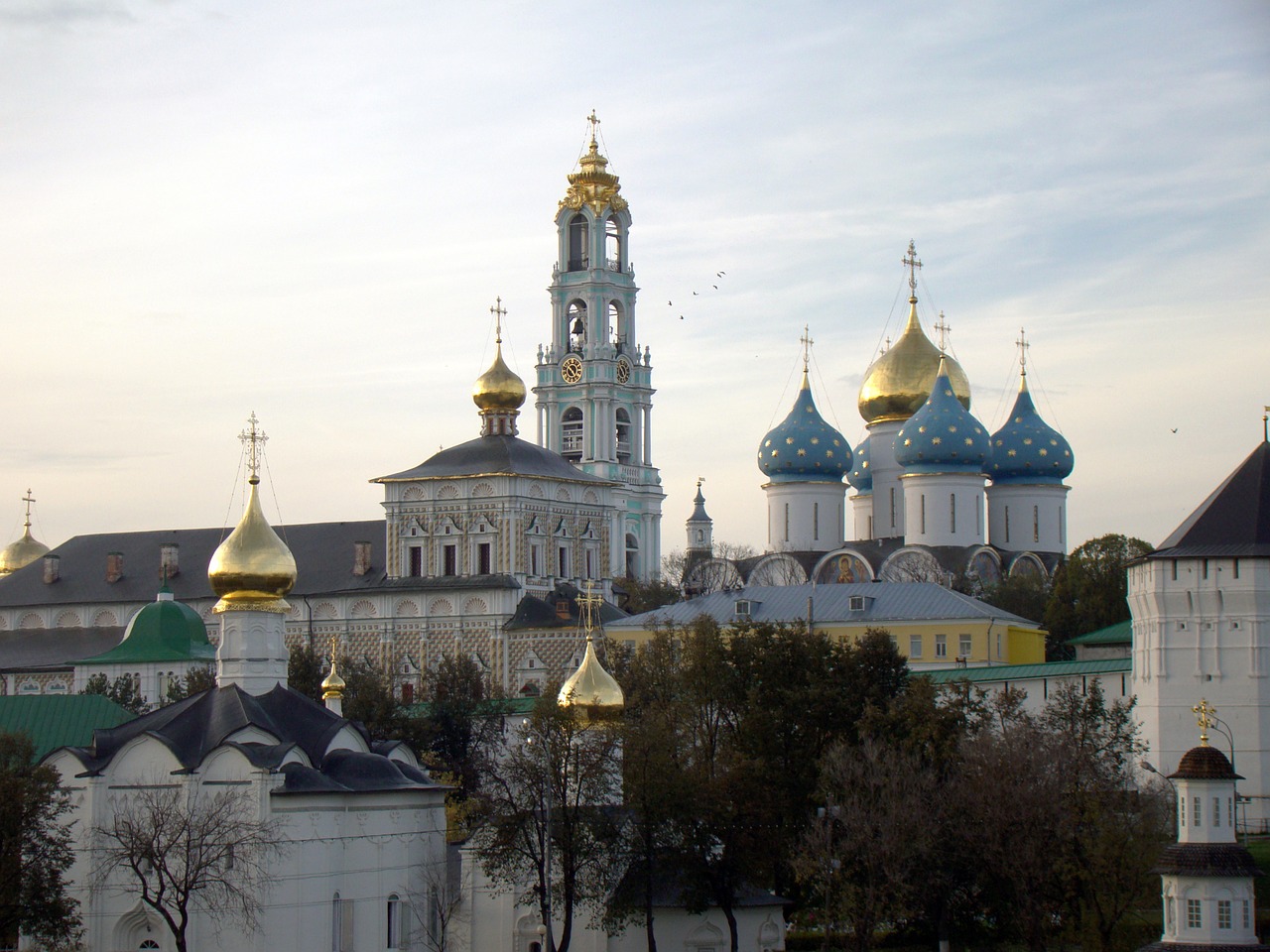 MeetnGreetMe aims to help you explore new destinations, learn about cultural differences and discover subtle details about the country you are planning to visit. With the help of our local MeetnGreeters we help world travelers receive personal concierge services and get the peace of mind when they are abroad, let them travel safe and carefree. Previously we brought to you our insider’s guide to Moscow and some interesting facts about what to do in Milan, Italy, now let’s move a bit further to the north-east..

Learning about the Russian history, mentality and spirit is impossible without discovering the tradition and story behind the Russian Orthodox Church. The Russian history, from the 14th century and up to now, has always been closely connected with the Holy Trinity-St. Sergius Lavra and its life. The monastery is situated in the town of Sergiev Posad about 70 km to the north-east from Moscow.  The city itself  is part of the famous Russian Golden Ring comprising the most renowned places which played a significant role in the history of the Russian Orthodox Church. 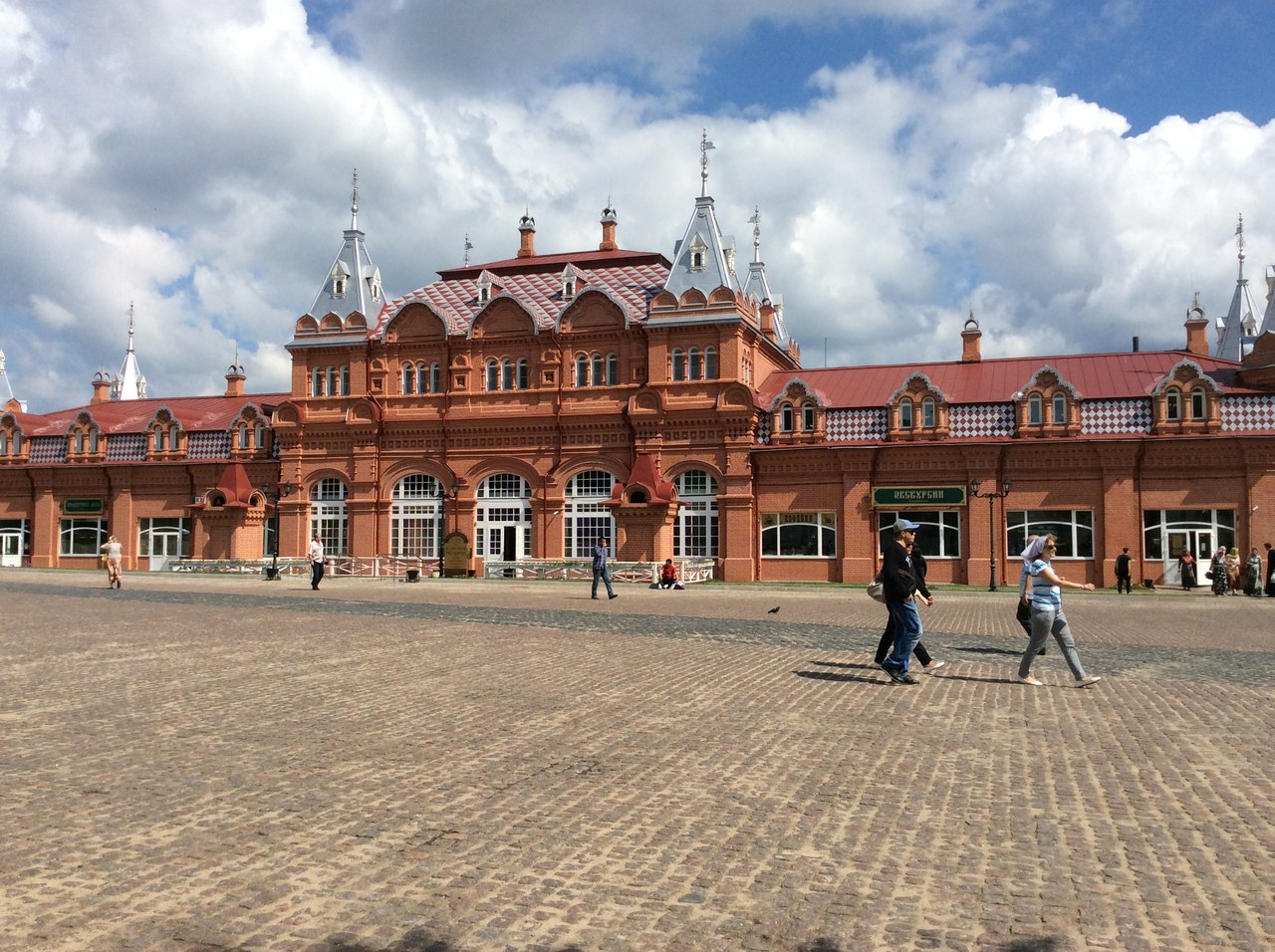 The Holy Trinity-St. Sergius Lavra was inscribed on the UN World Heritage List in 1993. Currently it is home to more than 300 monks. You can recognize them at sight as they pass by. They have black cassocks, skufias and crosses on their necks. The type of clothing varies and depends on the monastic rank. Monks walk slowly, speak quietly and have wise and kind facial expressions. Monks from all over the Orthodox world come to the Holy Trinity-St. Sergius Lavra to see and pray to St. Sergius incorrupt relics. So you will be able to see all kinds of monks in black and grey clothes, talk to them and ask questions you are interested in.

How to get to Sergiev Posad from Moscow:

1) You can go to the Yaroslavl railway station and take a train to Sergiev Posad or Aleksandrov (no worries, it stops in Sergive Posad too). If you are lucky to catch a fast train, it will take you around 1 hour to get to your destination. Normally it takes 1.5 hours to get to Sergiev Posad from Moscow.

2) It is also possible to catch a bus from VDNKH metro station.

St. Sergius of Radonezh is the founder of the Holy Trinity-St. Sergius Lavra, one of the most highly venerated saints and spiritual leaders of the Russian Orthodox Church. It is believed that he laid the foundation of the modern Holy Trinity-St. Sergius Lavra in 1337 when he constructed a wooden church in honour of the Holy Trinity. Later on he became role model for many Orthodox people and monks from all corners of Russia came to see him and join his way of life. Throughout all his life St. Sergius of Radonezh has played an important role both in the life of the Russian Orthodox Church and became a reliable advisor to Russian tsars and leaders. 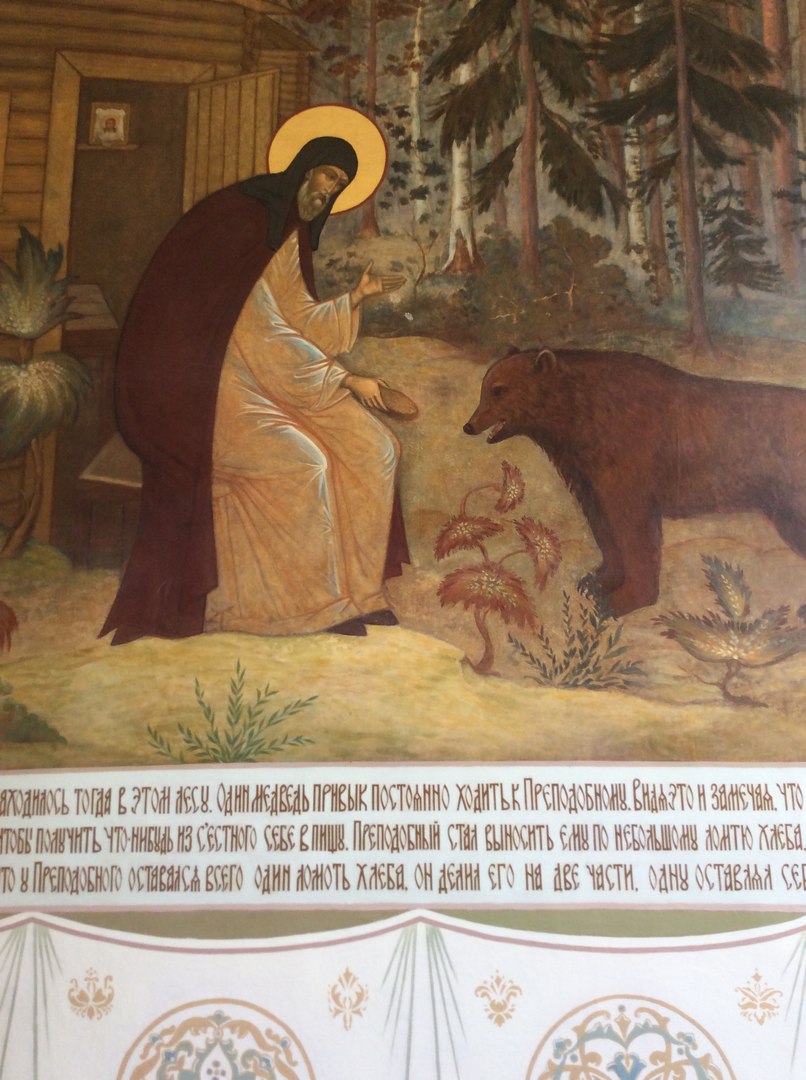 Here are a few interesting facts about the life of St. Sergius:

1) Even though St. Sergius of Radonezh was born into a family of well-off boyar family, he wasn’t a spoilt boy. He looked himself after horses and other domestic animals, helped around the house and wasn’t afraid of doing routine dirty job. Upon his parents’ death he decided to move to a secluded place and live an ascetic life. That is how he built the church in the wild forest and started his holy life.

2) Dmitry Donskoy received his blessing before the signal Battle of Kulikovo field with the Tatars and allied forces. St. Sergius predicted the victory of the Russian troops and sent his two strongest monks Peresvet and Oslyablya to help. The battle started with the fight of two strong men: the Russian monk Peresvet and the Mongol-Tatar knight Chelubey. Both warriors struck each other with heavy spears and dropped dead on the spot. This battle was the decisive in the history of Russia.

3) The legend has it that when St. Sergius of Radonezh was a young monk alone in the woods he became friends with a wild bear. Once during praying St. Sergius heard a wild bear roaring near his church. He took a piece of bread and gave it to the bear as a treat. Since then, they became friends and the wild animal came to the saint.

What to see in the Holy Trinity-St. Sergius Lavra

Upon coming to the Holy Trinity-St. Sergius Lavra you can order an excursion. There are many guides who speak different languages and they will be glad to take tourists around the holy place. Rates depend on the type of excursion and the spots included and range from 1500 RUB  to 8000 RUB per person (roughly from 20 EUR to 110 EUR).

The whole architectural ensemble includes more than 50 buildings and constructions dating back to 14th up to 18th century. 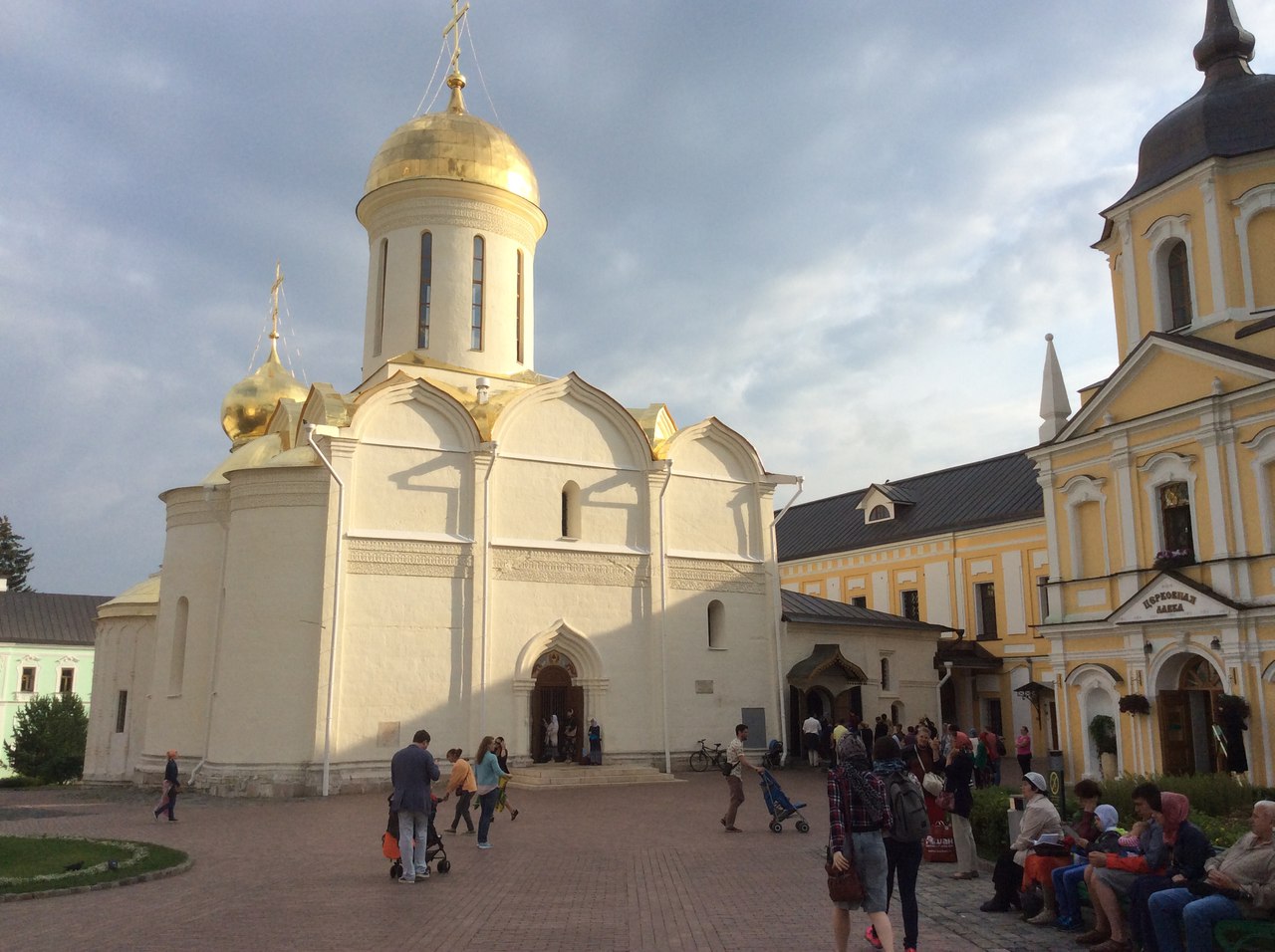 This is the main and oldest cathedral in the lavra (1422). There people can see and pray to St. Sergius incorrupt relics. It is believed that the relics are holy and wonderworking, they heal, renew and fill people with power and faith. In the cathedral they do not hold liturgies and services. Usually there is a long line of people in front of the Trinity Cathedral waiting for their turn to see the relics.

The Cathedral of the Assumption 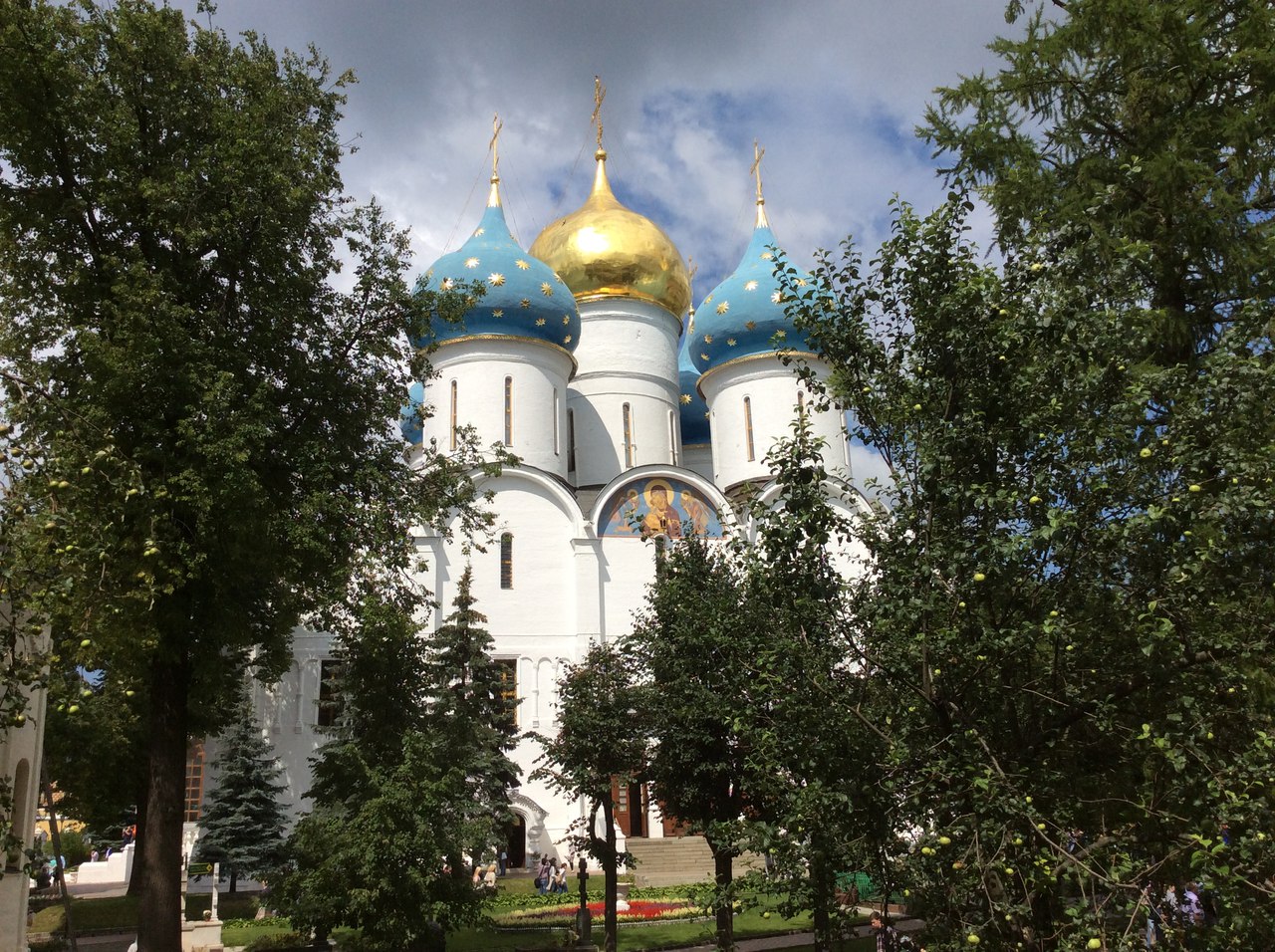 The six-pillared Assumption Cathedral was commission by Ivan IV the Terrible in 1559 as a replica of the Cathedral of the Assumption in Moscow Kremlin. However, it is much larger and magnificent compared to the one of Moscow. It took almost 30 years to erect and decorate the Cathedral. The vault here contains burials of Boris Godunov and his family. All services and liturgy usually take place here.

The Chapel at the Well 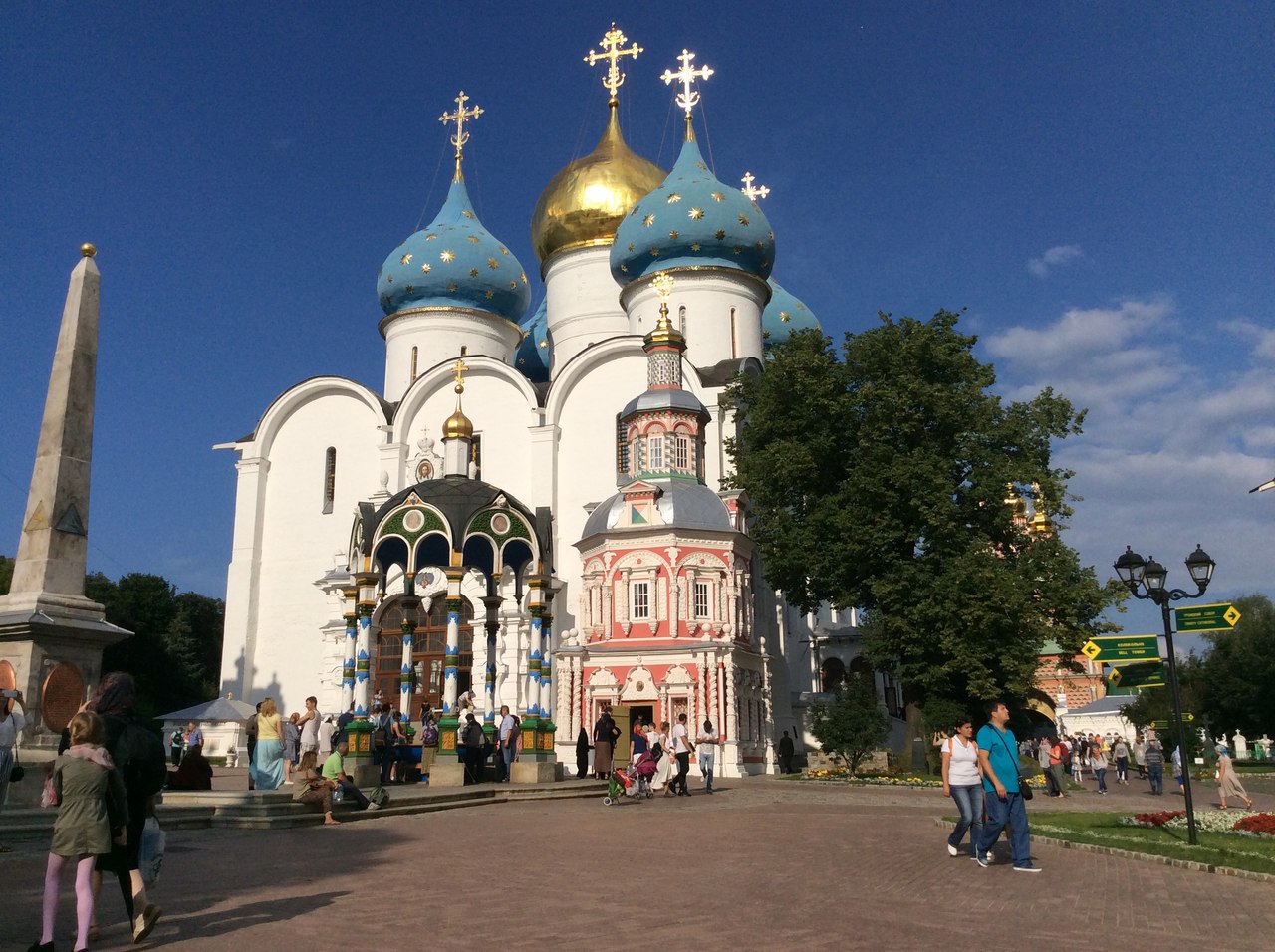 This is a baroque bell tower with a miraculous spring with cold holy water. The legend has it that St. Sergius prayed to God to have a spring on the territory of the lavra and this is how it appeared there. It took 30 years to build this tower. In summer it is possible to get some holy water in the yard in front of the Chapel as well.

What to try in the Holy Trinity-St. Sergius Lavra:

Monks have always cooked everything for themselves so they created their own recipes for different types of meals. When in the Lavra, make sure you taste monastic pastry. It is finger-licking and organic. What’s more, make sure you drink monastic kvas. This is a typical Russian drink made from wheat.

Finally, here are some interesting and curious facts about conduct on the territory of the Holy Trinity-St. Sergius Lavra 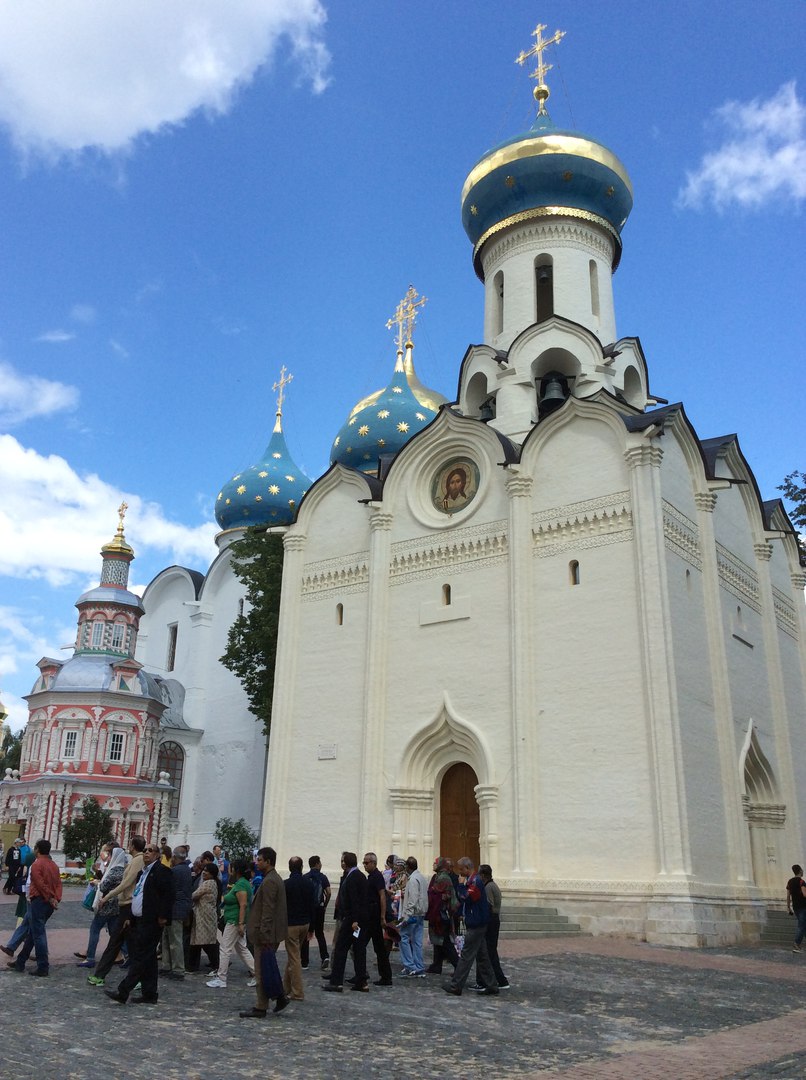 1) Ladies are supposed to wear a long skirt and head scarf to demonstrate their modesty and respect to God.

2) When you get holy water, never pour it out from the bottle. It is considered disrespectful because the wonderworking water is believed to be clean and fresh at all times.

3) When the Russian Orthodox people want monks to pray for their dear and beloved ones, they write their names on pieces of paper in cathedrals. It is believed that when monks pray to God, their prayers sound louder and stronger and will surely be heard by God.

4) You don’t need to pay for candles or prayers in the Holy Trinity-St. Sergius Lavra. You can take them and light near the icon you like. However, donations are always welcome.

Once you’ve visited all cathedrals, tried the monastic kvas and visited the liturgy, there’s one more thing you need to do. Sit on the bench in the yard and just look around yourself. Stop worrying about your life and minor issues, don’t talk, just sit still and enjoy the warm and solitary atmosphere of the place. The white old cathedrals, starets sitting next to you, monks in black clothes passing by, tourists coming here on purpose to collect good luck and blessing. There is something special about this place. Even if you are not religious, not Orthodox and not interested, there is still something good and warm you will definitely find there.

We hope you enjoyed this guide. For more, please check out other posts in our blog. Travel safe and with fun! And don’t forget about MeetnGreetMe Personal Concierge Services which make your stay truly enjoyable and memorable!

One response to “Sergiev Posad and the Trinity St. Sergius Lavra”