My Favourite Places in Lyon, France 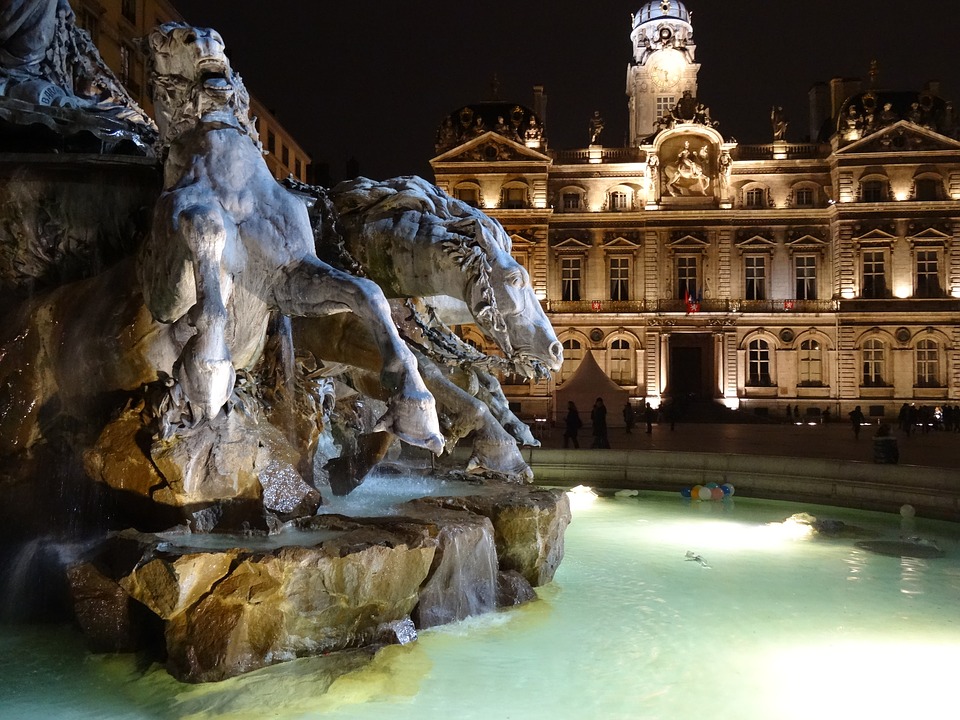 Hi guys! My name is Iulia and I am a Master student of International Hospitality Management. I’m studying in Lyon, an amazing city in France, and I’m absolutely in love with this city! So I wanted to share with you my love, experiences and my top places to visit in Lyon.

Have you ever been to Paris? Well, it is very touristy and trite. Lyon will blast your travel sensors off the charts. A romantic gourmet capital located on the river Rhone, with its charming views and smells of freshly baked croissants. Lyon is the third largest city in France, the capital of silk industry and the old capital of Gallia. Place of birth of brothers Lumières – the founding fathers of the modern film; and Antoine de Saint-Exupéry with his Little Prince. And it is not the whole list!

Lyon is a city of dreams indeed… You will experience the calm, yet joyful lifestyle of locals – Lyonnais, and at the same time visit its riverside wine bars with their soul reaching sommeliers.

Now, where should the dreaming begin?

Top places to visit in Lyon

Lyon has a beautiful bank which is crossed by a lot of bridges (about 27). Don’t miss the chance to aimlessly walk or take a bicycle. Or, admire the city’s heritage from the river. The view is spectacular at any time of the day or the night!

The hill of Fourvière 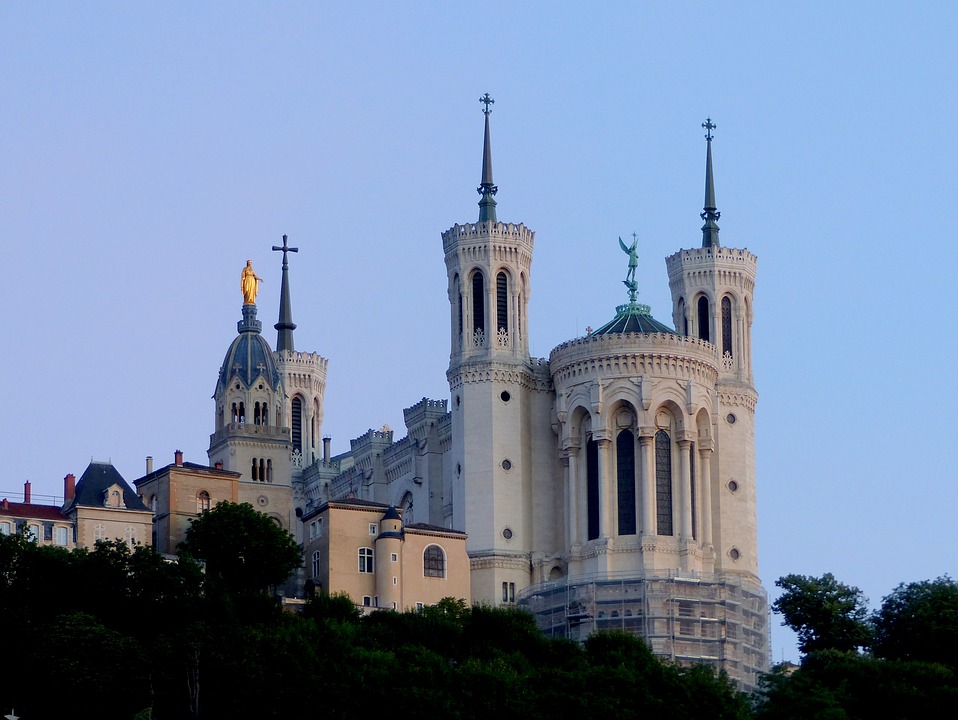 From the bank, you will see the hill of Fourvière. On the top of it, there is the 19th-century Basilica of Notre-Dame de Fourvière and a metallic – the copy of Eiffel Tower. From there, admire a splendid view of Lyon. Especially during the night when the city is illuminated. It should blow you away.

Afterward, it is worth visiting another side of the hill – the southern side.

There are a lot of various things to see dedicated to the period of Romans. Must see is the Gallo-Roman Theatre which is the largest one preserved in France and a Gallo-Roman museum close to it. During the summer and spring period concerts take place there. Have a chance to feel the atmosphere of this place. People think that this is the place (called Lugdunum) where Romans settled in the 5th century, and where the city of Lyon was established further. 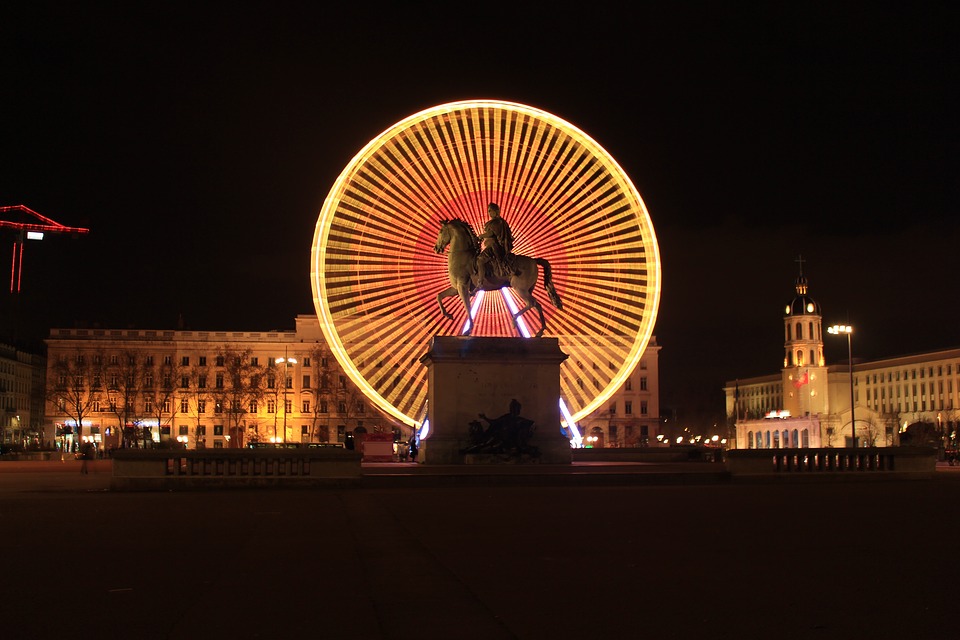 It is one of the biggest pedestrian zones in Europe, third largest square by size in France and the favorite place for meeting for locals and place for various events here in Lyon.

From Bellecour, there are two big streets: Republique and Victor Hugo with a lot of shops and boutiques. 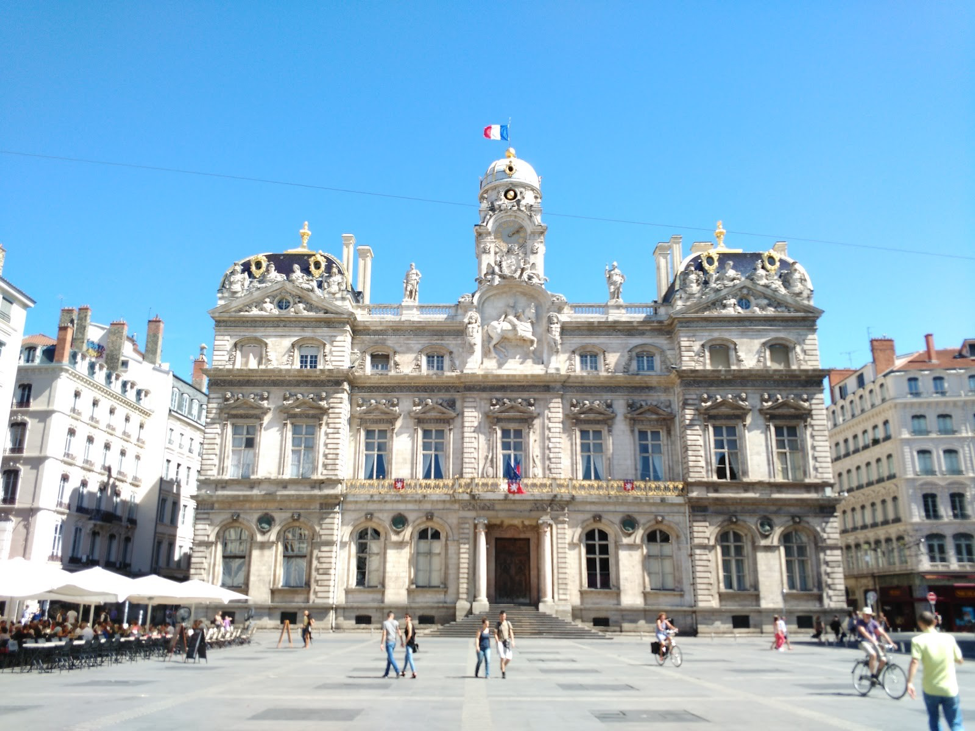 Hotel de Ville is one of the most beautiful buildings in Lyon. It was built in the 16th century and destroyed by fire several times. Now the city council is in the building.

The amateurs of art will fall in love with the beautiful Museum of Fine Arts, which has about 70 rooms and has one of the most important collections in France after Louvre in Paris. Rubens, Delacroix, Rembrandt are just some of names presented in this Lyon Museum.

In the middle of the square, there is a magnificent fountain which was built in the 19th century. It was initially made for the city of Bordeaux by Bartholdi who afterward became famous for the well-known construction of the Statue of Liberty. 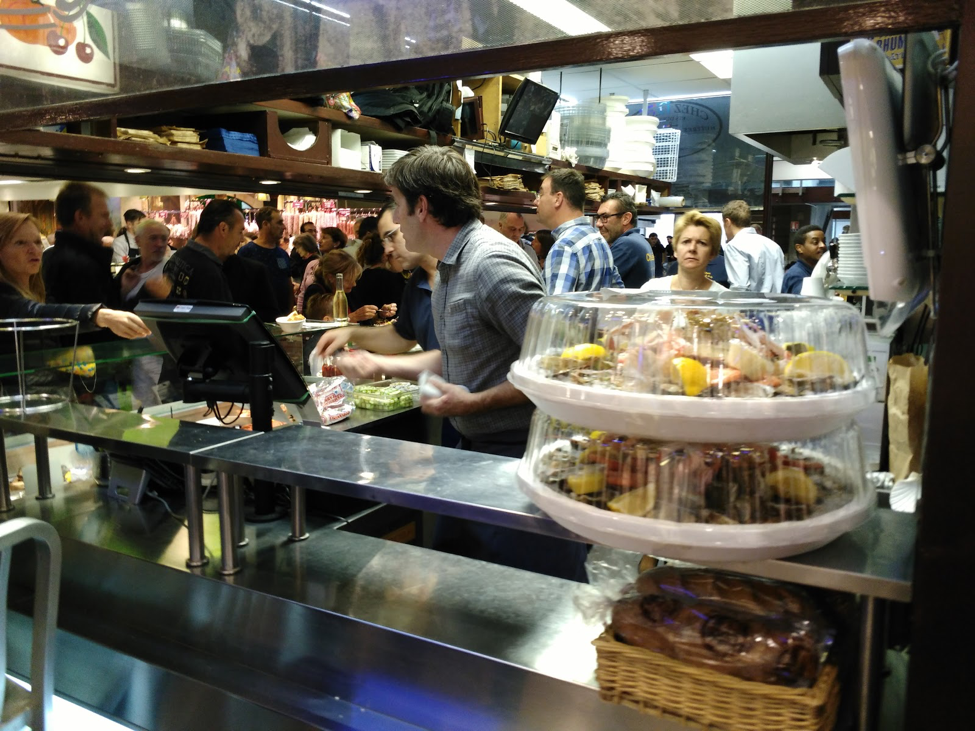 This market has been existing from the 1970s and was named after Paul Bocuse, the renowned chef of French and International cuisine. At this market, you can find all kind of food for cooking at home. Cheese, charcuterie, meat, fish and seafood, sweets and cakes, fruits and vegetables, everything you can find here is fresh and of the highest quality.

Also, you can eat at any of the small restaurants located here. It is true that restaurants here are quite expensive. Anyway, if you are in Lyon – ‘the world capital of gastronomy’, I think they are worth visiting and trying some delicious dishes.

Would you like to arrange a shopping tour for you? Easily! Local MeetnGreeters are ready to help you.

Museum of Miniature and Cinema 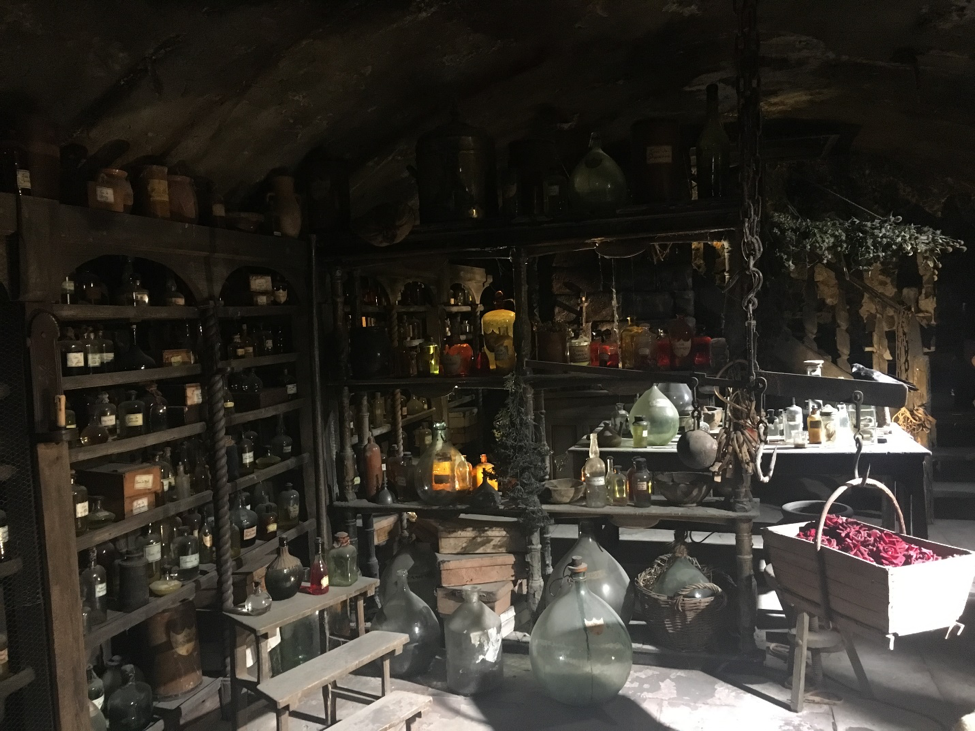 This is a museum where everything is dedicated to filming. You can find models from a lot of various movies such as Aliens, Harry Potter, Three Musketeers, the Last Emperor, Batman, etc. and their history. There is a separate fascinating room for the movies The Grand Budapest and The Perfumer. Moving further you will find a room with a lot of hyperrealist miniatures. Even though the size is small, the work is so elaborated that when you look at it, it gives the visual illusion that it is big and real. 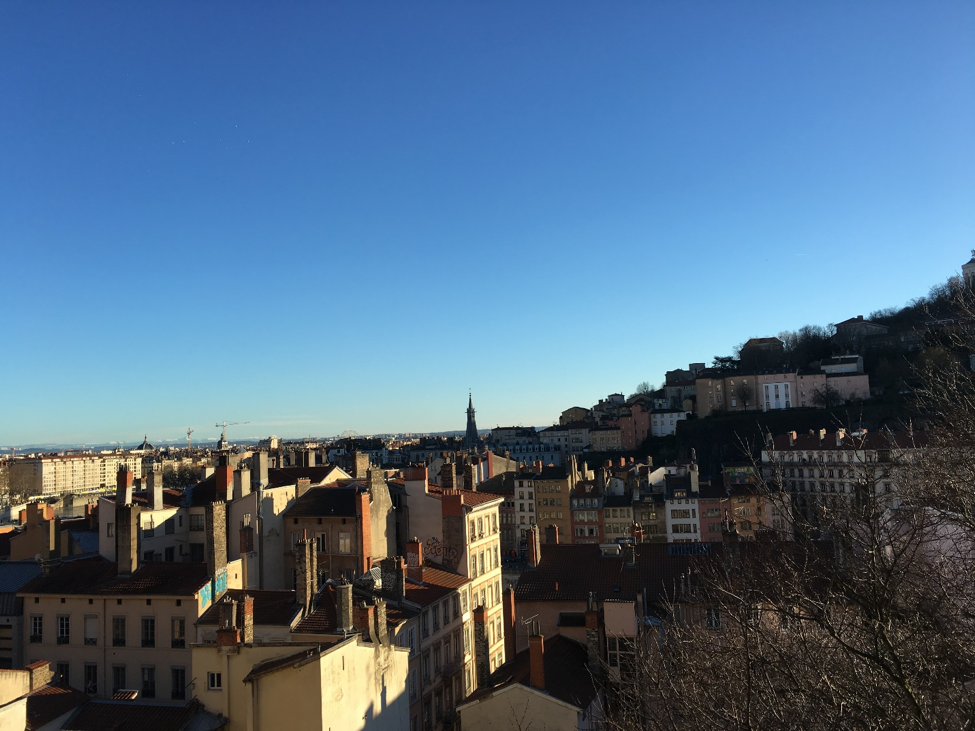 La Croix-Rousse is my favorite district for strolling and it is located on this hill. This place was famous at those times because of production of silk when silk manufactories moved here from Lyon Old Town. It had influenced the architectural unique style in which the neighborhood was built: high ceiling and windows to have enough space to work on a huge Jacquard loom and light to produce this sophistication as well as mezzanines – the place where families of workers could live.

This district has its unique atmosphere, different from the rest of Lyon. It is a great place for those who love walking along the district and all the way down to the Old City of Lyon.

It is impossible to visit Lyon and not to fall in love with it! Pack your backpack and get ready to an amazing journey with Lyon locals who will help with anything before and during your trip.

Charming Paris – Best Things to Do in the Ca...
Why You Just Have to Travel to Bordeaux
Berlin on a Budget

2 responses to “My Favourite Places in Lyon, France”